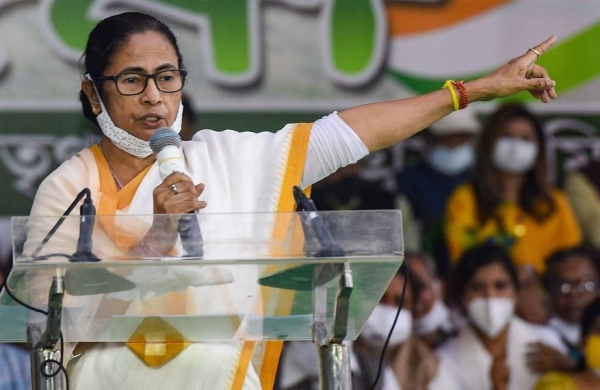 By Express News Service
KOLKATA: Challenging the BJP’s poll plank of citizenship for Matuas, Bengal CM Mamata Banerjee on Monday addressed a rally in Nadia’s Ranaghat — one of her erstwhile citadels comprising more than 40 per cent of Matua electorates who turned to be vote-bank of the saffron party in the 2019 Lok Sabha elections.

Aiming to woo the support of the Matua community, the CM asked: “They (the BJP) hoodwinked the people living in the region. I will not allow the Centre to implement NRC and CAA in Bengal. Why do you need citizenship? You have already become Indian citizens.”

The CM said the Centre would ask for documents related to date of birth of the elderly. “Most of them do not have their date of birth documents. If your parents fail to submit the documents, they will be driven out of the country. So in the upcoming elections, drive the BJP out of Bengal to protect your family members,” Mamata said in her speech.

As the discontent among the Matuas, comprising Hindu migrants from neighboring Bangladesh, has surfaced on many occasions in the recent past over the issue of delay in implementing the CAA, Mamata decided not to miss the opportunity to regain her party’s support base.

Last month, she had addressed a rally in Bongaon in North 24 Parganas and on Monday, she was in Nadia’s Ranaghat, both the seats dominated by Matuas and Dalits migrated from Bangladesh.

Though the BJP bagged victory in both the seats in the last year’s general elections riding the citizenship rhetoric, the party’s national leadership including national president JP Nadda and Union Home minister Amit Shah dodged the issue whenever asked about the deadline to implement the new Act.

BJP MP in Bongaon Shantanu Thakur recently hinted at possible changes in Matuas’ political allegiance in the upcoming elections and demanded an announcement of the deadline to implement the CAA. Following this, Amit Shah’s Bengal visit was scheduled for January 30. He is expected to assure the Dalit electorates on citizenship.

Taking a jibe at the BJP on its ‘Sonar Bangla’ rhetoric, Mamata said, “West Bengal has already been turned into Sonar Bangla. Bengal is now heading towards the goal of ‘Biswa Bangla’.

Referring to TMC functionaries’ migration to the BJP, Bengal CM said the turncoats changed sides to protect their money. “They made a huge volume of money. Now BJP is offering the deal saying they can join the party and protect the money or face probe by the CBI or ED,” she alleged.