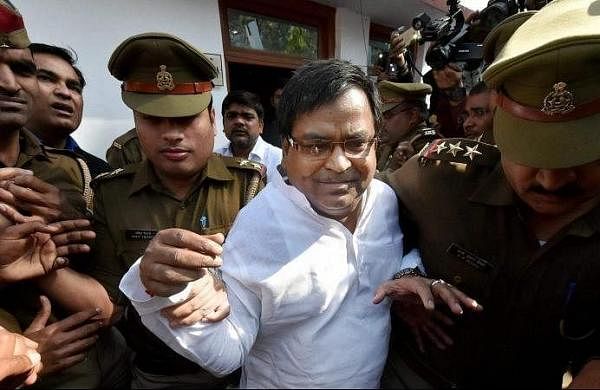 LUCKNOW: The Uttar Pradesh government on Saturday moved the Allahabad High Court, challenging the acquittal of former state minister Gayatri Prasad Prajapati of stringent charges under the POCSO Act despite being convicted of gang-raping a woman in 2017.

The state government moved the Lucknow bench of the high court, also challenging the acquittal of his associates in the gang-rape case.

On the government’s plea, a bench of justices Ramesh Sinha and Saroj Yadav issued notices to Prajapati, to be served through the jail superintendent.

A POCSO court on November 12 had convicted Prajapati for committing gang rape but acquitted him and co-accused Ashok Tiwari and Ashish Shukla of the charges under the POCSO act.

The high court issued a bailable warrant against these four accused for securing their appearance for hearing on the appeal of state.

Prajapati and other accused convicted in the case have also filed appeals against their conviction.

The high court slated April 26 to hear all appeals and cross-appeals together.

An influential minister in the previous Akhilesh Yadav government, Prajapati was arrested and sent to jail in March 2017 on charges of gang-raping a woman and attempting to rape her minor daughter.

He continues to be in jail since his arrest.

He was granted bail once but it was cancelled by the high court before he could come out of jail.

The high court had noted that there was foul play in the grant of the bail to him.

A woman hailing from the Chitrakoot district had accused the former minister and his accomplices of raping her.

She had also alleged that the then minister had also attempted to rape her minor daughter.

The FIR was registered with Gautam Palli police station of Lucknow on February 18, 2017 on the Supreme Court’s order on the woman’s plea accusing police of inaction on her complaint.