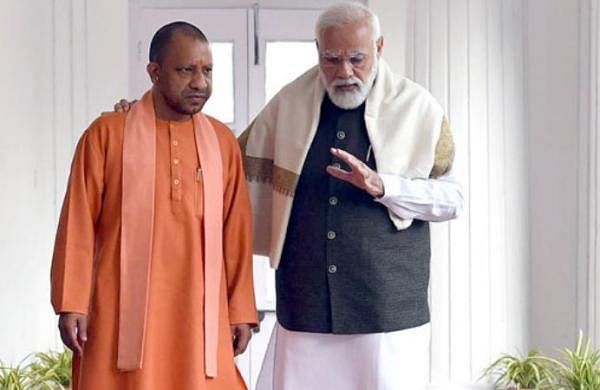 LUCKNOW: Ahead of the Assembly elections in Uttar Pradesh, two photos of Prime Minister Narendra Modi on a stroll with his hand on Chief Minister Yogi Adityanath’s shoulder have created quite a buzz.

Sharing the photos on Twitter, Adityanath also wrote a poem about the commitment of making a “new India”.

The photos of Modi with his hand on Adityanth’s shoulder deep in conversation were snapped at the Uttar Pradesh Raj Bhavan.

Adityanath had gone to meet the prime minister on Sunday morning.

However, it is not known what discussion took place between them.

Along with the photos, Adityanath wrote a poem in Hindi, which roughly translates to: “We have started a journey with a pledge, dedicating our mind and body, to make the sun rise; rise high above the sky and make a new India”.

The opposition Samajwadi Party scoffed at the photos of Chief Minister Adityanath and Prime Minister Modi.

Without a direct reference to Adityanath’s tweet, Samajwadi Party chief Akhilesh Yadav also wrote a poem in Hindi: “For the sake of the word, it has to be done in politics; unwillingly one has to put a hand over another’s shoulder and take a few steps together.”