Yet another explosion in illegal firecracker unit in Bihar, one dead and six injured 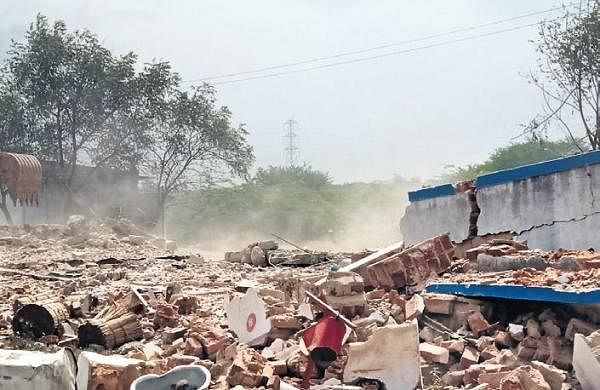 PATNA: Yet another explosion inside an illegal firecracker unit in Bihar’s Gopalganj district on Wednesday claimed the life of a 45-year-old man and left six people wounded. The deceased was identified as Ali Mian.

The incident took place at Bathua Bazar under Phulwaria police station in Gopalganj district when firecrackers were being manufactured. Locals said that the explosion was so powerful that its impact was felt over a radius of one km.

The walls and roof of the building used for manufacturing the firecrackers were badly damaged due to the impact of the blast. Local residents immediately informed the Phulwaria police about the incident. The critically injured were rushedto a Gorakhpur hospital in neighbouring Uttar Pradesh for better treatment.

On getting information, Gopalganj superintendent of police along with sub-divisional police official of Hathua rushed to the spot and inquired about the incident. An earth moving machine was pressed into service to remove the debris.

Gopalganj SP Santosh Kumar said the reason behind the explosion was being ascertained. Prime facie it appeared to be an explosion during making firecrackers. A forensic team visited the spot and collected samples from there, which will beanalysed.

This is the second explosion inside an illegal firecracker unit in Bihar in the last 10 days. Earlier, a similar explosion in Bhagalpur had claimed the lives of 15 people and left nine others wounded.

The anti-terrorism squad (ATS) of the state police was probing the incident’s links to terrorist or Maoist outfits, if any. The main accused in the Bhagalpur incident Mohammad Azad surrendered before the court on Monday.