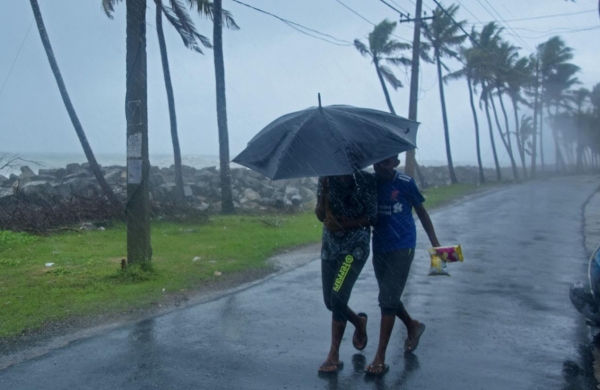 By PTI
NEW DELHI: The Indian Navy put on standby four warships and a number of aircraft on Saturday to deal with the possible impact of another powerful cyclone that is brewing in the Bay of Bengal and likely to hit parts of Odisha and West Bengal coasts on May 26.

The Indian Navy carried out a massive relief and rescue operation after cyclone ‘Tauktae’ battered India’s western coast earlier this week, leaving behind a trail of destruction in Maharashtra, Gujarat, Kerala, Karnataka and Goa.

The meteorological department said a low-pressure area formed over the east-central Bay of Bengal is likely to intensify into a very severe cyclonic storm and move towards West Bengal and adjoining north Odisha and Bangladesh coasts around May 26.

It said four naval ships have been put on standby with humanitarian assistance and disaster relief materials and medical teams.

“Naval aircraft are kept ready at naval air stations INS Dega at Visakhapatnam and INS Rajali near Chennai to undertake aerial survey of the affected areas, casualty evacuation, and airdrop of relief material as required,” the Navy said in a statement.

It said the Indian Navy is closely monitoring the movement of the cyclonic storm.

“Headquarters, Eastern naval command, and naval officers-in-charge at West Bengal and Odisha areas have carried out preparatory activities to combat the effects of cyclone ‘Yaas’ and is in constant liaison with the state administrations for rendering assistance as required,” it said.

Syama Prasad Mookerjee Port (SMP), formerly known as Kolkata Port Trust, is monitoring the situation in view of the forecast of a very severe cyclonic storm, Yaas, and taking preparatory measures to avoid loss of human lives, vessels, and other properties, an official said on Saturday.

The port authorities asked officials to ensure that all its vessels are taken inside the dock before the onset of the cyclonic storm, and no ships will be kept at river jetties, SMP Chairman Vinit Kumar said.

Control rooms at Kolkata Dock System and Haldia Dock Complex have been set up, he said.

“We are continuously monitoring the situation and will stop our operations at the right time. Control rooms at KDS and HDC have been manned by senior officers since May 21. Tugboats and launches will be available for any emergency,” Kumar said.

A low pressure area formed over east central Bay of Bengal on Saturday, which is likely to intensify into a very severe cyclonic storm and move towards West Bengal, adjoining north Odisha and Bangladesh coasts around May 26 morning, the regional Met Department said.

The system is very likely to cross the coasts of the two states and the neighbouring country on May 26 evening, said Regional Meteorological Centre (RMC) Director G K Das.

Kumar held a meeting with the deputy chairman of the port and officials of various departments to speed up the process of making preparatory arrangements.

The authorities hired and installed many generator sets at strategic locations, and will keep payloaders ready for any exigency, he said.

The port also asked officials to make sure that frontline workers with hydraulic ladder, diesel or battery- operated saw and other equipment are stationed at various locations.

CISF personnel and security staffers have also been urged to patrol the port areas to send first-hand information to the control rooms, the official added.

ICG stations, ships and aircraft on Eastern Seaboard are on high alert.

Though fishing ban has been enforced on the east coast, CG ships and aircraft at sea are broadcasting weather warning to fishermen who maybeoperating at sea and directing them to return to the nearest harbour for safety.

Ships at anchorage have also been advised to monitor weather and takenecessary shelter as a safety measure.

The Coast Guard is in close liaison with State/UT governments for sensitising the coastal populace, port authorities, oil rig operators for safety of boats,vessels and platforms, the release added.