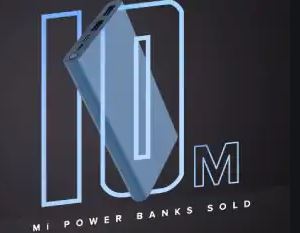 Chinese mobile manufacturer Xiaomi has announced that it will launch a new power bank in India on November 5 under the Mi brand. This will be Xiaomi’s most compact power bank. It has also been said that it will easily come in the pocket. In a report last month, it was revealed that Xiaomi Mi Power Bank 3 is working on ultra compact which can be a charging device. Xiaomi currently offers a group of power banks in India under both the Mi and Redmi brands.

Most Mi power banks are traditionally heavy and have a minimum of 12 cm which makes it as tall as a smartphone with a 5-inch display. This was told by Xiaomi in a post on Twitter. Currently Xiaomi has also launched the micro-site website of the upcoming power bank. However, its major specifications are not clear.

This Chinese company has shown the power bank in its teaser as the most powerful power bank ever. MySmartPrice claimed last month that the company is working on a new power bank ie Mi Power Bank 3 Ultra Compact with a capacity of 10,000mAh. The report also said that the power bank includes both micro-USB and USB Type-C ports for input. There is also two USB Type-A ports for output.