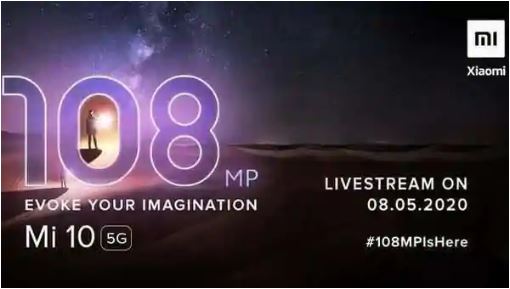 Xiaomi is conducting a launch event after a long hiatus, thanks to the coronavirus lockdown. The company is planning to launch a lot of interesting gadgets to cater to the demand that has been suppressed in the last few months. The tech company is expected to launch at least three new devices today. The virtual launch event will start at 12 PM and will be streamed live on the company’s official website, community website and other social media platforms like Twitter, Facebook, YouTube and Instagram.

The primary launch will be that of the Mi 10 which was initially planned to launch in the month of March. Xiaomi has launched the Mi 10, Mi 10 Pro and recently revealed the Mi 10 Lite in other countries but it seems the company will be sticking to just the Mi 10 for now in India.

The biggest USP of the Mi 10 is a 108MP primary lens in a quad-camera setup. So much so that the company is calling it the 108MP phone in promotions. Apart from the 108MP lens, the device gets a 13MP wide-angle lens sensor and a pair of 2MP sensors for portrait and macro shots. The front camera is a 20MP unit and is housed in a punch hole on the screen.

The device features a massive 6.67-inch AMOLED screen with a FullHD+ resolution which also has curved edges. The display gets a higher 90Hz refresh rate.

Qualcomm’s Snapdragon 865 powers the device. Xiaomi has offered up to 12GB of RAM and up to 256GB of storage in China. For now, we can’t be sure if Xiaomi India will launch all the variants of the device in India. The device also gets 5G connectivity.

As far as pricing goes, the company is expected to command a premium price for the high-end specifications. An important factor to be considered is that the device will be directly imported. The depreciating value of Rupee as well as 50% higher GST is also bound to factor into the price of the device. In China the device is priced at CNY 3,999 (Roughly ₹42,650). However, Xiaomi will be providing a few offers with the device which includes a free power bank worth ₹2,499 only for those who pre-book the device from 2PM today to 11:59 PM on 17 May.

Excellent Gauthan will be rewarded in Independence Day celebrations