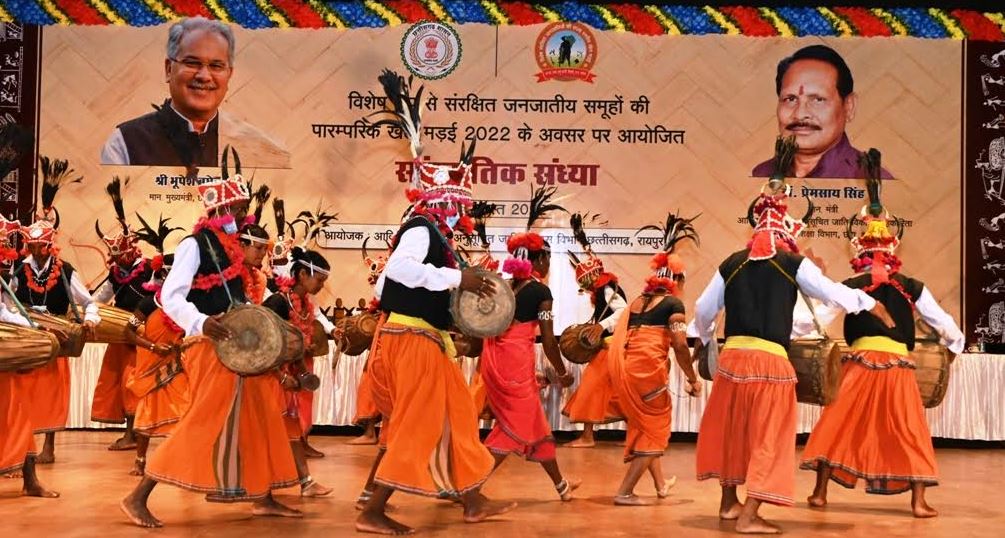 On the occasion of World Tribal Day, a cultural evening of traditional sports hut of specially protected tribal groups was organized in the auditorium of Pandit Jawaharlal Nehru Government Medical College, Raipur today. Colorful cultural programs were presented in the auditorium from 5 pm onwards especially by the cultural groups of backward tribal groups. Tribal and Scheduled Caste Development Minister Dr. Premsai Singh Tekam was the chief guest of the cultural program. The program was presided over by Parliamentary Secretary Shri Dwarkadhish Yadav. On this occasion, Secretary, Tribal Welfare Department along with other public representatives, Shri D.D. Singh and Commissioner Smt. Shammi Abidi were specially present. Minister Dr. Premsai Tekam encouraged the artists by playing Mandar during the program. In his address, he gave detailed information about the efforts made by the state government to promote education, health, agriculture, skill development, livelihood and cultural traditions of the scheduled tribes. He said that in the implementation of Forest Rights Act, more than 23 thousand 600 individual forest rights letters have been distributed by the State Government to the specially-abled tribal groups, whose area is more than 18500 hectares. Under Community Forest Rights, more than 1700 pattas whose area is more than one lakh 14 thousand hectares. More than 100 Community Forest Resources Forest Rights have been given to provide means of livelihood to the especially vulnerable tribal groups. Action is being taken to appoint 9623 educated youth of specially weaker tribal groups in government service according to their eligibility. For the protection and promotion of tribal culture, Rs 5 lakh each is being sanctioned by the government for the construction and restoration of Devgudis, the place of faith for the tribes. Along with this, special efforts are also being made to preserve the Ghotul practice prevalent in the tribal community. In the last three and a half years, 22 crore 82 lakhs have been approved for the construction and renovation of 1889 Devgudis. In the year 2022-23, an amount of 4 crore 70 lakh has been approved for the construction of 94 Ghotul for the cultural protection and promotion of local tribes in Narayanpur district, which will help in the protection and promotion of tribal culture and the coming generations will also be responsible for their culture. Be aware. In the cultural program, 7 groups of specially protected tribes gave their performance, in which the traditional dance of Agnai dance was presented by Pahari Korwa of Jashpur division, which is done in the month of Pus to commemorate the harvesting of paddy. Gaur dance by the Abujhmadia team, which is performed at Hareli to thank nature. Kamar dance by the artists of Gariaband district, which is performed at Nawakhai. Peda dance by the artists of Raigad district, which is performed on the occasion of Nawakhai. Karma Baiga dance from Mungeli district, which is performed for twelve months. On the occasion of Karma festival, that was performed by Surguja district Karma dance. At the end of the program, Minister Dr. Tekam honored all the artist teams by presenting them mementoes, citations. Like this:Like Loading… Continue Reading