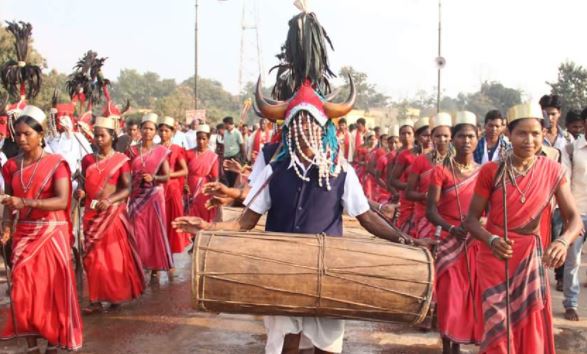 During the last time of Bastar migration, the Chief Minister was directed to establish Bastar folk dance, folk culture and language academy. So that the local culture, folk dances, folk songs, vernacular halbi, gondi, bhatri etc. of the tribal region of Bastar can be transferred from one generation to the next generation and be introduced to the rest of the world.
In this context, under the guidance of Collector Shri Rajat Bansal, continuous work is being done on four parts, respectively, on infrastructure, folk dance and folk songs, language faculty and folk literature, for the smooth implementation of the work. In this, separate works are being conducted to give impetus to the work of separate divisions. The construction of infrastructure in the first part of the work is towards completion in the village Asana. So that the institution will be started in the next day and traditional folk songs of Bastar, Dandami Madiya dance, Parab dance, Dhurwa Nacha etc. Likewise in folk songs, Chaitparab, Lejagit, Bhatrinat, Jagargit etc. can be introduced to the general public through experts. It can also be introduced to other countries and the world by performing it from time to time. Deputy Commissioner Tribal Development Department Shri Vivek Dalela is constantly working to complete these works.
It is also very important to know the local dialect in order to know the area and work in the area. To understand the sightseers of Bastar and tourists from different regions of the state to increase knowledge in the local dialect of Halbi, Gondi as per the requirement of the officers and employees in Bastar and sometimes between the administration and the public. In order to reduce the distance of the city and to introduce the Halbi, Gondi culture of Bastar to the country and the world, the speaking course in Halbi and Gondi has been almost completed. Its original composition and compilation has been prepared by Shivnarayan Pandey “Kolia” and Ablesh Kumar “Dasru” respectively so that in the near future the officers and employees working in the field area can be trained in Halbi, Gondi.