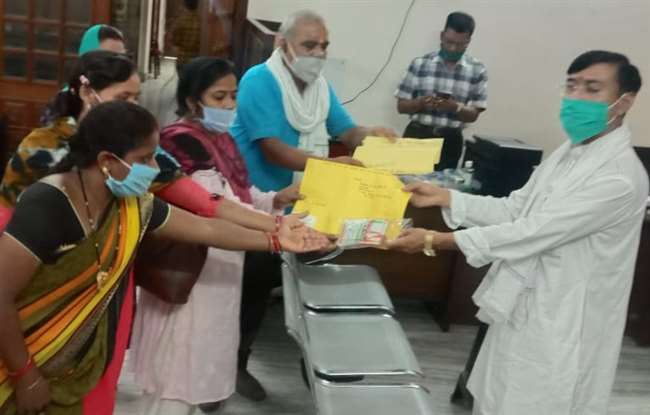 Varanasi: GI Craft’s Rakhi from Kashi has been sent to the brave sons posted in the Galvan Valley. Along with this, a wooden indigenous Rakhi made in Kashi has also been sent to Prime Minister Narendra Modi and CDS (Chief of Defense Staff) General Bipin Rawat. Apart from this, after the demand from Delhi and Maharashtra to promote this new industry, millions of rakhi have also been supplied for there. Apart from this, such a rakhi has also reached the markets of Varanasi.

The craftsman sisters sent wooden handmade rakhi including Prime Minister to the army personnel of Galvan Valley through the Parliamentary Office. It is being told that about a fortnight ago, the first consignment of such rakhi was sent to New Delhi for business by National Merit Awardee Rameshwar Singh. After this, demand from other cities also started coming. In the parliamentary office on Tuesday, women craftsmen sent a letter of request to the Prime Minister, requesting them to accept these clans and send heroic sons of Bharat Mata posted in the Galvan valley. Raj Kumar, who makes wooden rakhi, said that this rakhi has been made under self-reliant India. Through this, we are moving from local to global. Raj Kumar told that the price of a girl’s rakhi is starting from Rs. 20. Shalini, Vandana, Rita Pushpa, Sita, Virendra, Rajkumar, mainly while handing over the packet of Rakhi addressed to PM.

Respected Prime Minister, with the blessings and inspiration of you, we took the mantra under Kashi’s craftsman sister, daughters Atma Dependent India, and decided to make Rakhi for the first time under Kashi’s GI registered craft Chudwen Lakerware & Toys, in which Rameshwar Singh, National Merit Awardee has fully supported. We are sending this GI registered Rakhi to the brave soldiers of Galvan Valley deployed for the defense of the country and for you on the holy occasion of Raksha Bandhan. You are requested to send the Rakhi of the craftsman sisters of Kashi to the heroic sons of Mother India and embellish your wrist on the day of Raksha Bandhan and with the sister-in-law of Kashi, the value of the craft of Kashi is included in the intellectual property of the country. Increase.

With the inspiration of you, making the local global, in the transition period of Karona, about 50 thousand pieces of wood craft have been supplied to the handmade rakhi of Varanasi, which has given employment to many women craftsmen. I wish for your blessings. – Best regards, applicant craftsman.