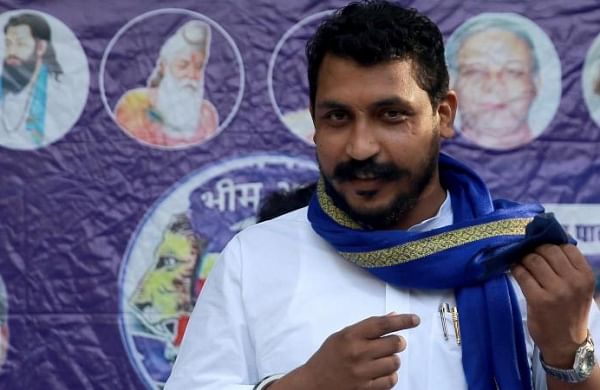 NOIDA: The Aazad Samaj Party on Tuesday said it will no longer approach the SP for a tie-up for the Uttar Pradesh Assembly elections even if Akhilesh Yadav offers it 100 seats.

Aazad Samaj Party (ASP) chief Chandrashekhar Azad said his party is open to stitching an alliance with others and maintained that his fight has always been with the RSS and the BJP.

The party had said last week that efforts were being made to form a third front of several opposition parties, apparently after disagreement over seat sharing with Akhilesh Yadav-led Samajwadi Party (SP).

“I have made it clear. The time was till today (Tuesday) for the leader whom I had approached for an alliance to stop the BJP. I announce this today that we are not going with them (SP). Now, even if they offer us 100 seats we will not tie-up with them because it’s a matter of self-respect,” Azad told reporters.

On Yadav saying he would extend support to the ASP, the flamboyant Dalit leader said he is a lawyer by education and understands well the difference in the language of support and taunt, in a veiled attack on the SP president who had offered two seats to the ASP recently.

He said workers and activists of the Bhim Army, a Dalit outfit he founded, and the ASP are strong enough to compete in the polls and have a reach at village level.

“It is true that we are open to forming tie-ups with other parties. Around 50 small outfits are sitting at our office now as we speak but we have come for the press conference here since it was pre-scheduled,” Azad claimed.

He added that ASP will not field candidates against the RLD, which has a tie-up with the SP for the UP polls because of respect for the Jayant Chaudhary-led party,which had offered the ASP the two seats that Yadav was talking about.

Elections to the 403 seats of the UP Assembly will take place in seven phases, beginning February 10.

The results will be announced on March 10.