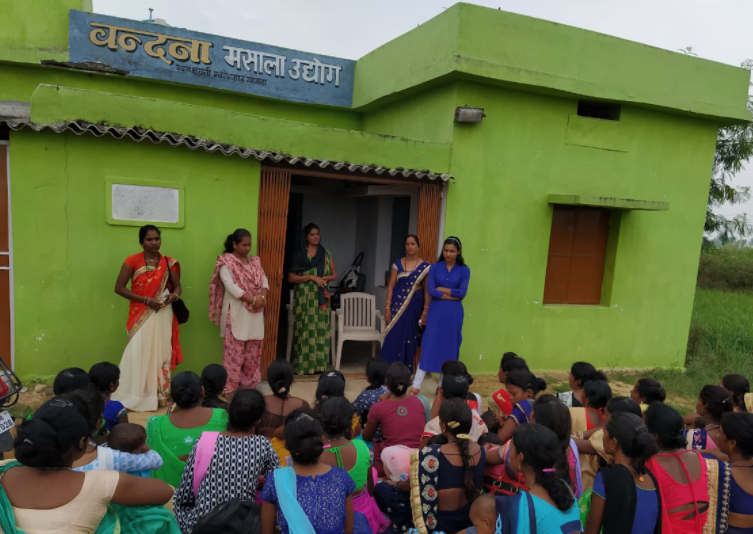 On the lines of the path where there is a will, the sequence of economic activities of women associated with Bihaan is going on continuously. A self-motivated organization of women which was not being established earlier due to financial weakness is now established with the help of Bihaan. This whole story of women becoming self-reliant is associated with Vandana Women Self Help Group in Gram Panchayat Majhgawan under development block Baikunthpur in Korea district. Common housewives living here, Mrs. Kiran Gupta and Mrs. Kamla, decided to form a group by joining ten women of the neighborhood twenty years ago. In 2000, under the Swarna Jayanti Gram Swarozgar Yojana, they all started collaborating together by forming a group. After being organized, Mrs. Kiran Gupta took over as president in this group and Mrs. Kamla took over the responsibility of secretary. In 2003, the Vandana Mahila Self Help Group received a loan of Rs 1.5 lakh after making small transactions among themselves. After getting a loan from the bank, the group started by creating a small unit to manufacture and sell spices used in food. In order to maintain the quality of the products, these products have also been registered with FSSAI in the Food Department. The group produces 10 to 12 quintals of spices per month as well as packing it. The group has started receiving more than 25 thousand rupees per month from this industry.
The chairman of the group states that initially there was a lot of problem in selling their product in the market due to not having much experience of this work. Members of the group had to work very hard to make customers believe their product. But this group, facing the challenges ahead, gradually established its work. After three to four years of hard work, they started benefiting from their self-employment. The group members said that in the year 2018, the group was registered under National Rural Livelihoods Mission (Bihan). After the group was registered under Bihaan, the group was funded in the form of a grant, which allowed the group to carry on the work of the industry as well as other products such as spices, pickles, chips, gram flour, and sale Started doing work too. Packing of these products is done by the group members themselves. Just 10 km from the block headquarters, this industry is operated and the products of the group are now demanded not only in Baikunthpur but also in other development blocks of district Korea, most of the traders of the district bought these products in bulk. goes. These products are supplied in the hostels and ashrams operated under the tribal department, with the group operating the Bihan Korea Mart, after being registered with the Bihaan scheme. Besides, the school education department started providing Vandana Women’s Self Help Group for preparing mid-day meals for children in schools. The women of the group said that when the demand for the product is high, the home access service of these products is also provided by the group members. From time to time, this group also stalls its products in the state and division level Saras Mela and various district level programs. By joining Bihaan, this group has now got a means of sustainable livelihood.