Women are becoming role models by joining thousands of women 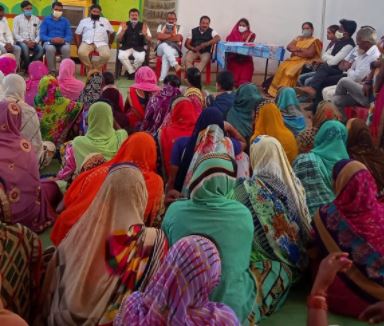 Women confined to self-help groups under the National Rural Livelihoods Mission Bihan, are confined to the boundary wall of the house and wage laborers are creating stories of change. CRP to make women from rural areas of Mahasamund development block self-reliant. The cycle is being run and the general assembly is also being organized. The program for the formation of the group was organized in the village panchayat Bawankera.
On this occasion, Parliamentary Secretary and MLA of Mahasamund Shri Vinod Chandrakar emphasized on women to become self-reliant and earn extra income by doing livelihood activity by joining Bihan scheme. The women associated with the group also expressed their views and said that joining the group increases confidence and self-reliance in women like us. With this, women like us can get their livelihood well by training them according to their skills. Apart from this, even while staying in the group, the household functions and family responsibilities are discharged well. Due to which the women of rural areas have started accepting the women of the group as their role models.