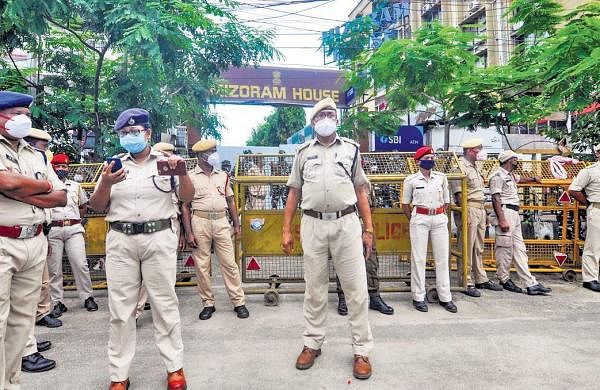 Express News Service
GUWAHATI: With supplies choked due to an “economic blockade” imposed by organisations in Assam, Mizoram appealed to its citizens to curtail domestic consumption even as a SpiceJet flight dispatched 3,711 kg of cargo to Mizoram from Assam’s Silchar.

The blockade has been imposed in all three districts of Assam’s Barak Valley — Cachar, Karimganj and Hailakandi. They share a 164.6 km border with Mizoram. National Highway 306, which traverses Cachar, is Mizoram’s lifeline.

The Mizoram government said people had been advised to reduce domestic consumption in anticipation of the continuance of the problem.

“Given the blockade and due to the fact that railway lines have been destroyed (in Hailakandi by the miscreants), there will certainly be some difficulties in getting essential and non-essential commodities in the coming days…

“Under the circumstances and in anticipation of the problem, we have requested the people of the state not to hoard essential items and curtail domestic consumption. If we curtail it by a bit, then there will be enough for all for a longer time,” Mizoram’s Department of Food, Civil Supplies & Consumer Affairs Director Ramdinliani told The New Indian Express.

She said although essential commodities were being brought from Tripura, the volumes of them were much less compared to what used to come before via Assam.

“Mizoram is under a serious crisis due to a blockade created by the Assam government. This has severely affected the availability of medicines required by patients who are in critical conditions and by those severely affected with Covid-19,” Lalthangliana said.

He said in the aftermath of the July 26 border clash, the Assam government summoned all transporters in Guwahati to stop the transportation of goods to Mizoram due to “security concerns”.

“This resulted in a complete halt of any type of goods coming to the state, including basic medicines, life-saving medicines and Covid-19 medicines. Even oxygen cylinders, oxygen plant materials, and Covid-19 test kits have been blocked,” the Minister said.

The Silchar Airport tweeted: “On 02.08.2021, #AAI #SilcharAirport helped in dispatch of 3711 kgs of Cargo by @flyspicejet flight to Lengpui Airport, #Aizawl.”