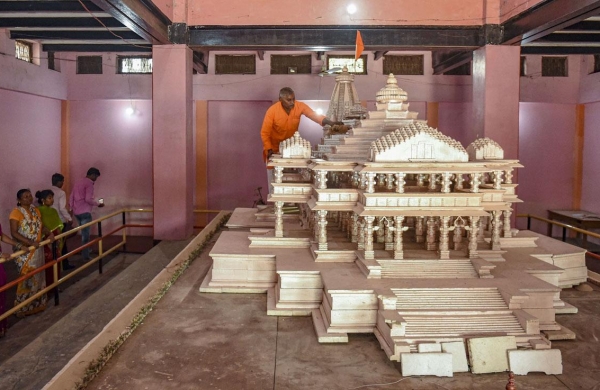 Express News Service
LUCKNOW: The Ayodhya Ram temple trust is contemplating a global drive to collect donations after the ‘Samarpan Nidhi Abhiyan’ run by the Vishwa Hindu Parishad (VHP) volunteers concluded on February 27 with a collection of over Rs 2,100 crore.

According to Mahant Govind Dev Giri, the treasurer of the trust, a lot of requests were pouring in from Ram Bhakts living abroad to launch a global drive for collecting donations.

Giri said that a decision in this connection would be taken by the trust at a meeting of the trustees shortly. “Members will discuss modalities and protocol related to RBI, Finance Ministry, I-T regulations and clearances, to be followed for launching the ‘Samarpan Nidhi Abhiyan’ globally,” said one of the trustees.

The sources claimed that the trust had already deputed an expert to study the subject of global funding and laws and regulations involved to avoid any potential controversy.

In September last year, Shri Ramjanmabhoomi Teertha Kshetra Trust had applied for the central government’s permission to accept foreign donations as devotees from abroad had started sending donations for the temple to the Trust after PM Narendra Modi had performed the ‘Bhoomi Pujan’ on August 5, 2020, said a trust member.

It is to be recalled that the construction cost of the temple has been revised and pegged at Rs 1,500 after changes in its foundation designs. The Trust General Secretary Champat Rai said that more funds will be required for the expansion of the 70 acres temple complex.

However, some other trustees did not rule out the re-launch of the donation drive if the need arose as that the budget for the temple was not final yet. The cost of the temple is bound to increase given its grandeur, magnificent look, and solid structure planned by the trust and engineers engaged in the project.

“The extra funds may be used to renovate and give a grand look to other surrounding temples related to Lord Ram Lala in Ayodhya. The trust will ensure that not a penny donated by Ram Bhakts is wasted,” said the senior member.

“The temple of Lord Ram will certainly consolidate unity and integrity. It will add a new chapter in the country’s cultural and secular fabric,” said Ansari refusing to divulge the amount he and his family donated.