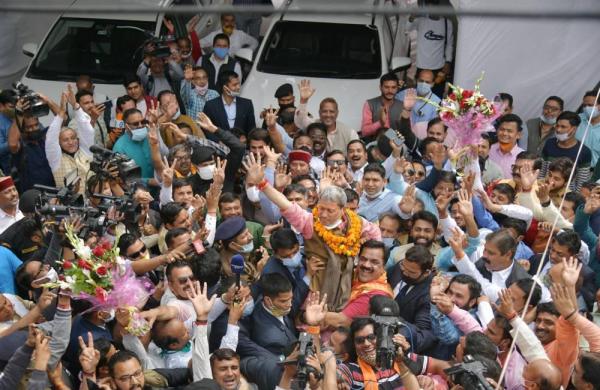 Express News Service
DEHRADUN:  With the BJP springing a surprise by asking Lok Sabha member Tirath Singh Rawat to take over the new Uttarakhand chief minister, he has the onerous task of cleaning up the mess created by his predecessor Trivendra Singh Rawat, despite having little legroom and the Assembly elections less that a year away.

On the flip side, Tirath knows Uttarakhand’s politics inside-out as he did a stint as the state unit chief of the party and is credited with its 2014 Lok Sabha performance.

Known as a simple and down-to-earth leader, Rawat takes over the reins of power in Uttarakhand at a time when the ruling BJP is preparing for the state Assembly polls due early next year.

His principal challenge will be to ensure the party another term in office.

He also has a clean image and is considered close to the top leadership of the party, including Union home minister Amit Shah.

However, since the last budget of the state government has already been passed, there is not much in terms of policy he can do to redeem the situation before Assembly polls in 2022, political experts said.

ALSO READ | Who is Tirath Singh Rawat? All you need to know about the new Uttarakhand CM

What’s doable though is to pacify the dissenters, reverse some of Trivendra’s unpopular decisions such as the Char Dham Shrine Board and the formation of the Gairsain commissionary, tighten the bureaucracy and run a fair and efficient government.

“I am a small party worker from a village. I had never imagined that I will be a given an opportunity like this by the party. I hope that with everyone’s cooperation and blessings, I will fulfil the expectations from me,” he said.

Since Tirath alone was administered the oath of office on Wednesday, the first challenge is to pick a balanced council of ministers.

There was discontent within the party over giving major berths to Congress defectors in the outgoing ministry.

At least 10 new faces are expected to be inducted into the new ministry.

“He has to act on four fronts cabinet composition, budget and finances, Covid vaccination drive, and deal with the unpopular decisions of his predecessor in less than an year,” said Rahul Shekhawat, a Dehradun-based analyst.

Ironically, Tirath was denied a ticket in the 2017 state elections, said party insiders.

Two years later, he contested the Lok Sabha polls from Pauri Garhwal and trounced Manish Khanduri of the Congress by over 3 lakh votes.

Born in Siron village of Pauri district, he was a full-time worker of the RSS from 1983-88 and then rose to become the state vice-president of BJP’s Yuva Morcha of the erstwhile Uttar Pradesh.

Though Rawat has held important organisational positions both in the state and at the Centre, he is a first-time MP.

Former Chhattisgarh chief minister Raman Singh, whose report to the central leadership of the party set in motion the process of leadership change in the hill state, said, “With the kind of challenges facing Uttarakhand, it has got a good leader.”

Union Education Minister Ramesh Pokhriyal “Nishank”, who was also being considered a contender for the post, said Rawat was a good choice.

“Tirath Singh Rawat is indeed a good choice. Now the BJP is sure to win the 2022 Assembly polls in Uttarakhand,” he told reporters after coming out of the state party office.

Rawat was the state’s first education minister, a part of the interim government when Uttarakhand was carved out of Uttar Pradesh.

He went on to become the state BJP president from 2013 to 2015 and is now a national secretary.

In the 2017 assembly polls, the BJP nomination for Chaubattakhal went to heavyweight Satpal Maharaj, overlooking Rawat’s claim to the seat he had won in 2012.

But the party made up to him.

Rawat was soon made a national secretary and given the ticket to contest from Pauri Garhwal Lok Sabha constituency in the 2019 general elections.

In that poll battle, he was pitted against BJP veteran and former chief minister Bhuvan Chandra Khanduri’s son Manish Khanduri, who was the Congress nominee.

The senior Khanduri appeared to maintain distance as both his son and Rawat, who was considered his own protégé, tried to dig into his support base.

Rawat, who had described himself as the true heir to Khanduri’s political legacy, won by 3,02,669 votes, one of the biggest margins in the state.

Tirath Singh Rawat’s wife Rashmi, a professor of psychology, vouches for his “simplicity”.

“He is simple and unassuming despite having occupied several organisational positions, and a long political experience. These are his virtues,” she told reporters after Rawat was elected leader of the state legislature party.

“He is a serious man and does not speak much,” she said.

Electoral activity will start in November-December, which leaves Tirath little time to shake off anti-incumbency. No party in Uttarakhand has got a consecutive mandate to rule so far.