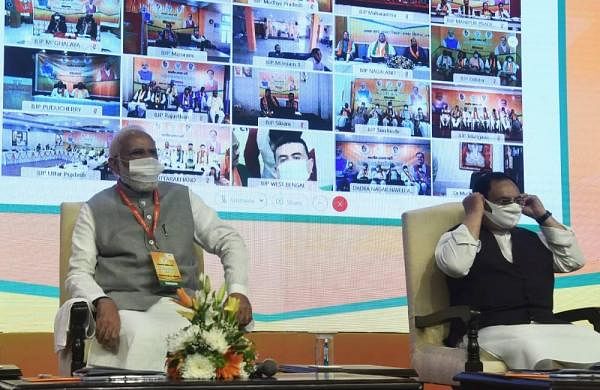 NEW DELHI: West Bengal politics resonated in the Bharatiya Janata Party national executive meeting being held in the national capital Sunday as party chief JP Nadda assured the leaders and people that “the BJP will chart a new story in the state”.

With many leaders who played a crucial part in the recently concluded Assembly polls in West Bengal, Swapan Das Gupta, Anupam Hazra, Kailash Vijayvargiya present in the audience, the BJP President assured that the BJP will write a new story in West Bengal.

“I want to assure the people of West Bengal that we will be with you and we will chart a new story in the state,” said Nadda.

The political situation in West Bengal is witnessing a lot of churn with many dissatisfied elected BJP leaders leaving the party to join ruling Trinamool Congress.

The party had to face embarrassment after one of its newly-nominated national executive committee member Rajib Banerjee left the party and joined TMC again.

Nadda also gave targets to be completed on the ground to the party leaders. The party chief said that booth level committee formation must be completed before December 25.

“Every booth has been mobilised to listen in to the Maan Ki Baat at the booth level,” stated Nadda.

While mentioning that BJP’s vote share has increased in every poll, Nadda said that from general to the panchayats polls, the vote share of the BJP has increased. In fact, in Jammu and Kashmir, the BJP has and is performing exceedingly well,” stated the party chief.

He listed policies started by the Centre for health and agriculture.

Nadda has addressed the national executive committee meeting in national capital with PM Narendra Modi, and several Cabinet Ministers and Chief Ministers in presence. Many other senior leaders including, LK Advani and Murli Manohar Joshi, have joined the meeting virtually from their respective states.