Will quit politics if Channi government gives any proof against Majithia: Sukhbir Badal 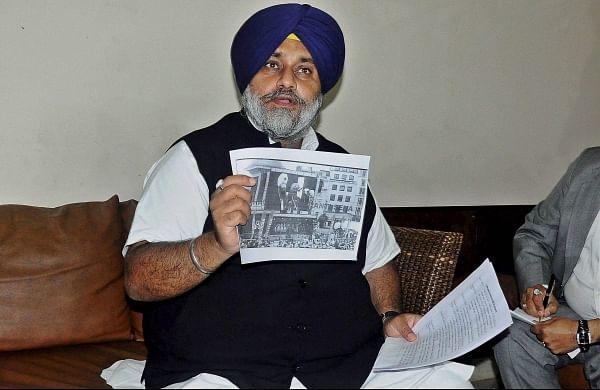 CHANDIGARH: SAD chief Sukhbir Singh Badal on Tuesday said he will quit politics if the Charanjit Singh Channi government brings any proof against his brother-in-law and Akali leader Bikram Singh Majithia who has been booked in an NDPS case.

Calling the case against Majithia as false and highly politicised, Badal warned that everyone responsible for implicating an innocent person in a “false” case will have to face consequences.

The high court, however, has granted three-day protection to Majithia from arrest to enable him to move the Supreme Court to challenge its order.

As president of @Akali_Dal, I declare that I’ll quit politics if this govt can produce any proof against @bsmajithia on this false & highly politicised case against him.

Conversely, everyone responsible for implicating an innocent in a false case will have to face consequences, Shiromani Akali Dal chief Badal said in a tweet.

In another tweet, he added that the party will fight for every worker who had been booked in false cases.

We will fight for every @Akali_Dal @bspindia worker booked in false cases in the ongoing vendetta politics of @CHARANJITCHANNI govt.

The next SAD-BSP govt will constitute a judicial commission to investigate all the false cases and recommend action against those behind these, he said.

Majithia, 46, who was booked under the Narcotic Drugs and Psychotropic Substances (NDPS) Act last month, had moved the high court seeking anticipatory bail.

His anticipatory bail plea was rejected by a Mohali court on December 24.

Majithia is the brother-in-law of Sukhbir Singh Badal and the brother of former Union minister Harsimrat Kaur Badal.

The former Punjab minister was booked under the NDPS Act on the basis of a 2018 report of a probe into a drug racket operating in the state.

The report was filed by anti-drug special task force (STF) chief Harpreet Singh Sidhu in the Punjab and Haryana High Court in 2018.