Will not participate in ‘shahi snan’ in Yamuna unless water is clean: Hindu seers 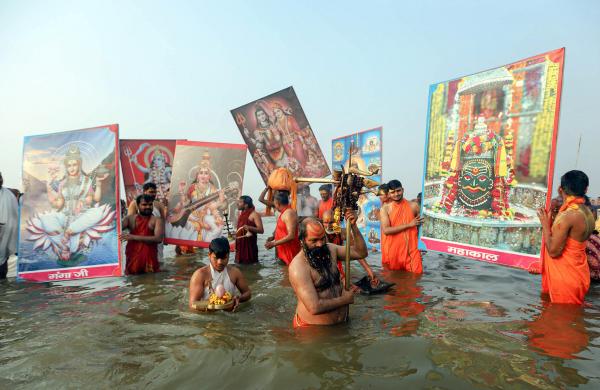 By PTI
MATHURA: Underlining the Yamuna’s acute water pollution, three prominent Hindu seers of the country on Saturday vowed not to take another bath on other ‘shahi snan’ days during the ongoing Vrindavan Kumbh near here unless the river water is clean.

The declaration to boycott the ‘shahi snan’ in the river on three remaining auspicious days — March 9, 13 and 25 — and thereafter during subsequent Kumbh fairs was made by the chief of the Ayodhya-based Maha Nirvani Akhara, Mahant Dharm Das.

Mahant Dharam Das made the declaration in presence of the chiefs of two other Vaishnavi akharas, Maha Nirmohi and Maha Digambar akharas.

“In the next ‘shahi snan’, we would take the holy dip in the Yamuna, only if the water is clean,” Mahant Dharm Das said, with the chiefs of two other prominent akharas nodding in agreement.

The Mathura district administration had promised to arrange for clean water in the river at its Devraha Ghat during the Vrindaban Kumbh by discharging additional water from the Ganga but nothing appears to have been done, he said.

Mahant Dharam Das made the critical remark on the pollution in the Yamuna after taking a holy dip along with the two other seers at the Devraha Ghat of the river.

The three seers earlier led a procession of saints to the river bank for ‘shahi snan’ during which they were showered with flower petals all along the route of the procession, said Nagendra Pratap, a government official deputed to supervise arrangements for the Vrindavan Kumbh fair.

The three other shahi snan days of March 9, 13 and 25 coincide with ekadashi (month’s 11th days), amawasya (moonless day) and another pious day as per the Hindu calendar, said Pratap.