Will make Assam govt party to case against CAA in SC if voted to power, says Gaurav Gogoi 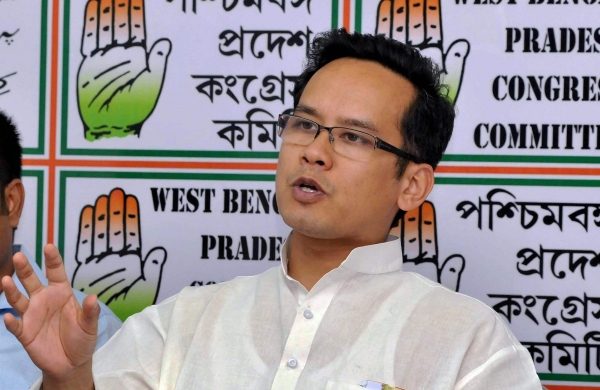 By PTI
NEW DELHI: Alleging that the Citizenship (Amendment) Act was the BJP’s “political tool” to divide society for votes, Congress leader Gaurav Gogoi on Friday said if the Congress-led alliance comes to power in Assam it will not allow its implementation and make the state government party to the ongoing case in the Supreme Court to oppose the controversial law.

The Congress’ deputy leader in Lok Sabha said both the identity and the development of Assam are at stake in the upcoming polls to the 126-member Assembly, and asserted that the “winds of hope” in anticipation of a ‘Mahajot’ (grand alliance) government were blowing in the state.

In an interview with PTI, Gogoi also hit out at the BJP for criticising the Congress’ alliance with the Badruddin Ajmal-led All India United Democratic Front (AIUDF), saying the alliances formed for the polls in the state were not based on religion but on whether one is for CAA or against it.

Asked if he would be willing to take on the mantle of chief ministership if the Congress-led ‘Mahajot’ comes to power, Gogoi said he has never been after any post and hopes to serve the party in whatever role it deems fit for him.

Gaurav Gogoi’s father Tarun Gogoi, who passed away last November, was chief minister of Assam for three terms successively between May 2001 and May 2016.

Gaurav Gogoi said his father has left a vacuum and nobody can fill his shoes.

“We miss his wisdom and experience tremendously. He was the one who proposed in a Congress core committee meeting last year in August that the Congress should enter into an alliance with the AIUDF and other like-minded parties in the 2021 elections. The concept of the ‘Mahajot’ is not recent and it was pushed by him,” he said.

“His (Tarun Gogoi’s) ideas remain alive, his work remains alive, people remember him and we have taken a pledge to fulfil his unfinished work and fulfil his dreams he set out for Assam,” Gaurav Gogoi said.

“Therefore, we will bring back the importance and value of the Assam Accord in terms of defining who is an Indian citizen and who is not. When it comes to the concerns of doubtful voters and Indian citizens who are fighting cases in foreigners’ tribunal we will ensure that their cases are looked at in a much more expedited manner,” Gogoi said.

What the Congress is proposing is a constitutional solution and one that is in the spirit of the Assam Accord, he said.

Asked if the Congress would allow implementation of the CAA, Gogoi said “absolutely not”, and asserted that if voted to power, the Congress-led alliance will make the state government party to the ongoing case in the Supreme Court to oppose the CAA.

Assam has a unique perspective on the CAA given its history of the Assam Accord and given how sensitive the issue of peace and harmony between different diverse communities is, the 38-year-old leader said over phone.

“CAA has done nothing but upset the delicate balance and offered no concrete solution to the real issues. So, it is nothing but (the BJP’s) political tool to divide society for votes,” Gogoi said.

He also said there are genuine cases of Indian citizens who are excluded from the National Register of Citizens (NRC) that are under trial under the foreigners’ tribunal and, if voted to power, the Congress-led government will ensure that the ongoing cases are expedited and all genuine citizens are included in the NRC.

The Assam Accord provides for detection and deportation of all illegal immigrants, who have entered the country after 1971 and living in the state, irrespective of their religion.

Under the CAA, members of Hindu, Sikh, Buddhist, Jain, Parsi and Christian communities who have come from Pakistan, Bangladesh and Afghanistan till December 31, 2014, facing religious persecution there will not be treated as illegal immigrants and will be given Indian citizenship.

Anti-CAA protesters in the state say that the law violates the provisions of the Assam Accord.

About 140 petitions challenging the CAA have been filed in the apex court, including by Kerala.

Gogoi also said that all state leaders were running one of the most united Congress campaigns ever seen.

Asserting that both the identity and the development of Assam are at stake in the upcoming polls, Gogoi said the CAA, prior to COVID-19, was a huge issue in Assam and people going to vote are now thinking about the future of our language and culture.

“At the same time, among socio-economic issues, unemployment is the most burning issue among the young people. A majority of the people in Assam are in the youth bracket and as it is Northeast suffers from a lack of industrial private sector investment compared with other parts of the western India. So, the pain of unemployment is far more acute in the Northeast and in a state like Assam,” he said.

People are really looking forward to the five guarantees that the Congress is offering — nullifying CAA, providing five lakh government jobs, raising the daily wage of tea plantation workers to Rs 365, free electricity up to 200 units per household and Rs 2,000 as monthly income support to all homemakers, he said.

Asked if he would take up the chief ministership, Gogoi said right now he was focused on fulfilling the promise of the five guarantees to the people.

The Congress is contesting the forthcoming polls as a part of the “Grand Alliance” along with the AIUDF, Bodoland People’s Front (BPF), CPI(M), CPI, CPI-ML and the Anchalik Gana Morcha.

Elections to the 126-member Assam assembly will be held in three phases on March 27, April 1 and April 6.