Will include OBC castes Mahishya, Teli in reserved category if voted to power: Nadda in Bengal 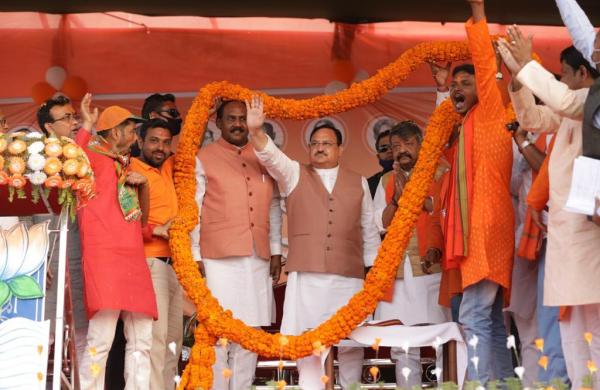 By PTI
KOTULPUR: Alleging that the Mamata Banerjee dispensation has not done anything for the welfare of farmers and Adivasis in West Bengal, BJP president J P Nadda on Tuesday claimed that after practising politics of appeasement for years, the TMC supremo has started reciting Sanskrit slokas to assert her Hindu identity.

She left several Hindu OBC castes such as Mahishya and Teli out of the reserved category because of her “politics of appeasement”, and the BJP, if voted to power, will take steps to include them, Nadda said while addressing a rally at Kotulpur in Bankura district.

Banerjee had won elections in the name of ‘Ma, Mati, Manush’ (Mother, Land and People), Nadda said and alleged that during the last decade, her party has engaged in “torturing women, killing BJP workers, dictatorship, extortion and politics of appeasement”.

“I am told that Mamata Banerjee is now doing Chandi Path. But in the last 10 years, you have been engaged in minority appeasement. You have stopped Saraswati Puja in the state and immersion of idols of goddess Durga,” he said.

Banerjee did Chandi Path (recitation of hymns) at Nandigram, from where she is contesting, at a public meeting on March 9.

“During the stone laying ceremony of Ram Mandir at Ayodhya, you stopped people from offering puja in the state,” the BJP president said.

Referring to the court verdict in the Batla House encounter case, Nadda said that the TMC supremo had claimed in 2008 that it was fake and would quit politics if proved wrong.

Nadda asked, “What will she say now?” A Delhi court Monday awarded death penalty to convict Ariz Khan for the murder of decorated Delhi Police Inspector Mohan Chand Sharma in connection with the sensational Batla House encounter case of 2008.