Will feeding peacock by PM Modi be considered a preparation for war? 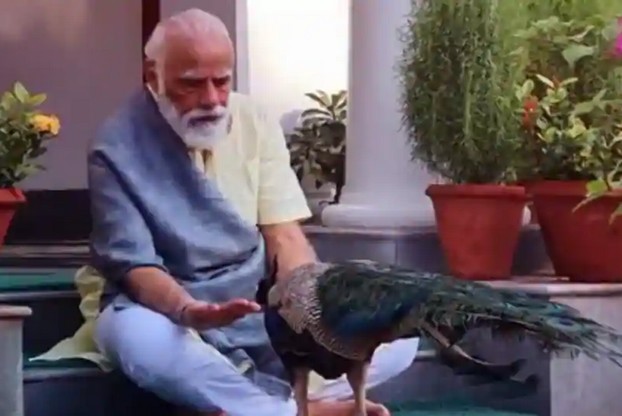 Ever since Prime Minister Narendra Modi shared his video with the Indian national bird peacock on social media, it has been speculated that Modi is preparing for a big action. After all, what is scripture saying about what is going on in social media?

Social media: Prime Minister Narendra Modi is seen feeding the peacock in his video, this video of the prime minister with peacock and peacock’s children is being appreciated on social media and some people are also speculating that Modi’s feeding of peacocks is a sign of war. Many types of reactions are being made on social media and in its different style, meanings are also being extracted.

Estimates of scholars of astrology and scripture: Peacock or Peacock is considered to be the vehicle of Kartikeya. In Sanatan Hindu scriptures, Kartikeya has been called the commander of the gods. When the terror of Asuras increased, the Gods got freedom from the terror of Asuras by appointing Kartikeya as their commander. Veer Karthikeya is considered the god of war in Sanatan Dharma. According to astrologers, whenever a king went to war, he must worship Kartikeya Swami along with Ganeshji as he is also considered to be the lord of Mars which is the victorious planet in the war. It is believed that Modi ji would also like that Shivaputra Karthikeya can be joined before any major action.

Karthikeya is considered the greatest deity in South India. They are called Subramanian and Murugan there. One of his names is also Chasasana and Skanda. Kartikeya slays Tarakasura and gives the Devas their place. According to the Puranas, Lord Kartikeya was born on Shashthi Tithi, hence his worship has special significance on this day. He became the commander of the gods in the famous Devasur Sangram. Their glory is described in the Puranas as Kumar and Shakti.
Kartikeya is worshiped mainly in South India. People of Yajidi caste also worship them in Arabia, they are their main deity. He ruled under the name Skanda only in the particular region of Uttar Kuru, a region near the North Pole. Skanda Purana is named after him. Lord Skanda is also known by the name ‘Kumar Karthikeya’.

However, this is only a guess. Many of its meanings can be extracted, but the PM is peacock living in the housing complex and Narendra Modi has been feeding them with grains before this, but for the first time, people have started speculating due to sharing videos. There is no truth in these speculations.