Will buy paddy from all registered farmers, farmers should be rest assured: Shri Bhupesh Baghel 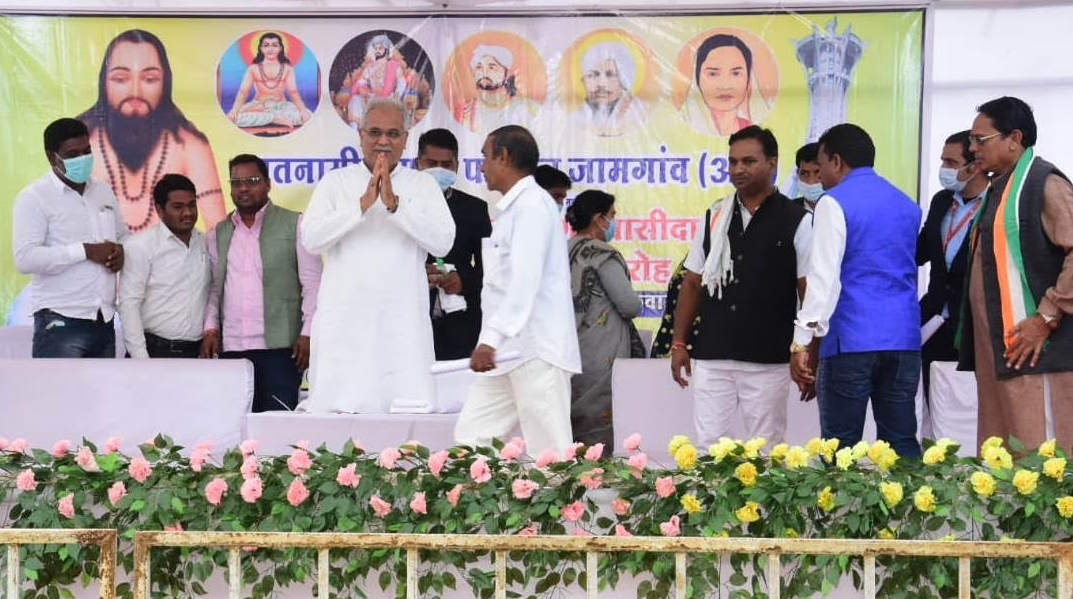 Paddy procurement is happening fast in the state, till now about 58 percent of the farmers have been procured, we are committed to buy paddy from all the registered farmers. Chief Minister Shri Bhupesh Baghel said this at Baba Guru Ghasidas Jayanti celebrations organized at Jamgaon-R in Patan block of Durg district. On this occasion, the Chief Minister said that instructions have been given to make good arrangements for procurement of paddy for the farmers in all the societies and better arrangements have been made for this. He said that last year 92 lakh metric tonnes of paddy was procured, this year one crore metric tonnes of paddy is likely to be procured. He said that there is a crisis of DAP across the country and to deal with this crisis in Chhattisgarh, the promotion of manufacturing of Vermicompost and Super Compost has been of great benefit. The Chief Minister asked the farmers present there about the production from vermicompost. Farmers told that vermi compost has given a good crop, the brightness of the crop is also good. The Chief Minister said that Chhattisgarh has set an example in the entire country through Godhan Nyay Yojana. This time a unique tableau of Godhan Nyay Yojana of Chhattisgarh will also be seen in Rajpath and a glimpse of the innovations related to agriculture happening in the state will also be seen. The Chief Minister said that earlier cow dung was only used for smearing, now it will also be used for washing. Work is going on to make paint from cow dung. Apart from this, electricity will also be produced in the village through cow dung. For this, outside experts will come soon and work on this will go ahead technically. The Chief Minister, in his address on the occasion, said that the message of Baba Guru Ghasidas was that of Mankhe-Mankhe, one equal. This sense of equality given by him is deeply rooted in Chhattisgarhi society. The white flag of Satnam Panth is a symbol of peace. On this occasion, the Chief Minister said that drug addiction is the root of social evil, due to which women especially have to face difficulties. Whether it is Satnam Samaj or all other societies, if there is an initiative to de-addiction from all the societies, if public awareness campaigns are run fast, then it will go a long way in reducing this evil. The Chief Minister also announced construction of auditorium buildings at Jamgaon-R and Selud on the occasion. Many public representatives and villagers were present in large numbers on this occasion. Like this:Like Loading… Continue Reading

Beneficiaries identified in Mukhya Mantri Jan-Seva Abhiyan will start getting benefits of schemes from next month: CM Shri Chouhan