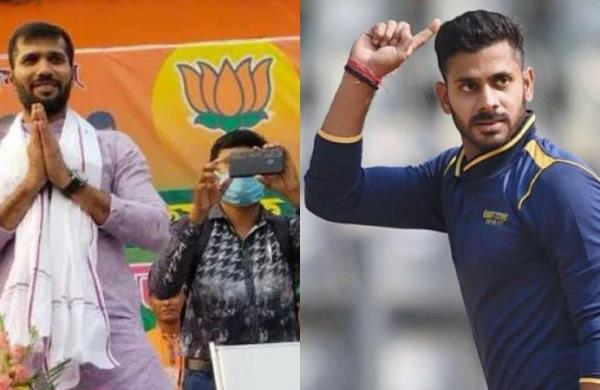 By PTI
NEW DELHI: Having shared a dressing room with fellow cricketer Ashoke Dinda for years, TMC’s new recruit Manoj Tiwary on Wednesday said his friendship with Dinda would remain intact despite him joining the BJP but quipped that he would “always look to score boundaries” off the paceman’s deliveries on the political pitch.

Tiwary, an aggressive right-handed batsman who represented India in 12 One-day internationals and three T20s, has been named as the Trinamool Congress (TMC) candidate from the Shibpur seat in Howrah.

In an interview with PTI, he said he wants to play a long innings in politics and the idea as always has been in his cricketing career was to — make Bengal win.

He said like he does in cricket, he would always offer a “straight bat” in politics as well and work for the people in a straightforward manner.

On his association with Dinda, who has joined the BJP and is the saffron party’s candidate from Moyna, Tiwary said just because Dinda has gone to the BJP does not mean that they will not be friends.

“Yes, we cannot be friends till the elections get over. We also live in the same complex so when we get an opportunity to meet we would, but don’t want to discuss politics,” Tiwary told PTI over phone.

“It is his (Dinda’s) decision (to join the BJP), I have made the right decision, he can answer for himself.

As a person I wish him well,” the 35-year-old cricketer-turned-politician said when asked about his former Bengal teammate’s decision to join the BJP.

Tiwary quipped that he will always look to score boundaries off Dinda’s deliveries on the political pitch.

Talking about his entry into politics and in the electoral fray, the former Bengal cricket team’s skipper said he wants “to play a long innings” in politics and his foray into public life was a “lifelong commitment”.

“I never see myself as a celebrity, I have come up the hard way and I can relate to the struggles of the people,” Tiwary said, adding that his life’s aim was and will always be to make Bengal win.

Pointing to some qualities from his cricketing career that would stand him in good stead in the political arena, he said the game had taught him to become a better human being and make less mistakes.

He said he already possessed leadership qualities which had been honed while captaining India Under-19, a team which had Rohit Sharma in its ranks, and India A.

“I have led the Bengal team to many trophies.

The leadership skills were there, and like in the field I would let my actions speak in the political field as well,” Tiwary said.

Asked the reason for making the switch from cricket to politics, he said the main reason was the desire to serve the people of the state and of his constituency.

“I had some injury before the playing season.

I got injured before the Mushtaq Ali Trophy, but took injections in consultation with the doctor so the pain was reduced but I played with discomfort.

After that tournament, I made a decision not to continue playing and pulled out my name from Vijay Hazare,” he said.

“All this was going on and then I got a call from Mamata (Banerjee) didi and she asked me to contest the polls.

In the 2019 (general elections) also she had asked me but it did not work out at that time.

So, all things came together and the decision making was easier for me as I wanted to do something for the people and serve them,” he said.

Tiwary also pointed out that he was doing a lot of social service activities and helping in his own capacity even as a cricketer.

“I felt when she (Banerjee) was asking me to be with her in this so-called difficult phase then how can I not help, especially when I am born here and got so much love and recognition here,” he said.

On choosing the TMC over the BJP, Tiwary said he was moved by issues such as the farmers’ protest and petrol prices going up, but a major reason was Mamata Banerjee.

“She is an inspiration and a fighter. I did not want to go to the other side,” Tiwary said.

Hitting out at the BJP, he said the promises which it made to the common people were not fulfilled.

“I don’t want to go into the details, but look at the jobs issue, they (BJP) promised to bring back black money and give Rs 15 lakh to people, all of which was disturbing me a lot,” he said.

Tiwary said he cannot see the poor people suffer and lose their lives because of false promises.

Slamming the BJP, he cited the examples of farmers committing suicides and migrants walking hundreds of kilometres with some of them even mowed down by a train during the COVID-induced lockdown in the country.

He also asserted that the upcoming polls were also a fight for Bengal’s identity.

“The kind of statements BJP leaders, their chief ministers and ministers made in Bengal, I didn’t like that, as they want to play divisive politics while in Bengal all religions coexist happily,” he said.

Tiwary exuded confidence that the TMC would win the assembly polls.

“It is not overconfidence but the number of people that are coming in large numbers (for public meetings) is evident.

We can predict a win,” he said Tiwary, a stylish and aggressive right-handed batsman, has been a prolific run getter for Bengal in domestic cricket and also has a triple century to his name.

Elections to the 294-member assembly will be held in eight phases from March 27 to April 29.

Shibpur will go to polls on April 10.