Why is PM not sad over Assam floods or anti-CAA movement, asks Priyanka Gandhi Vadra 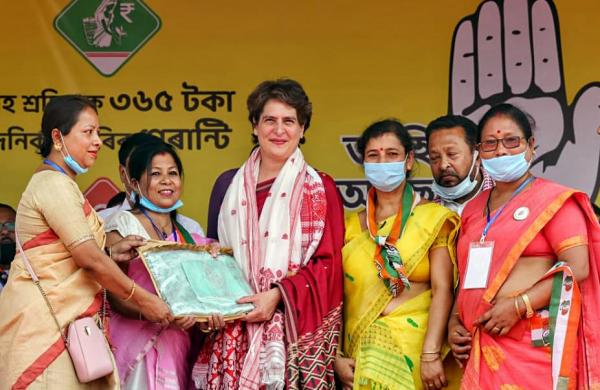 By PTI
JORHAT: Launching a frontal attack on Prime Minister Narendra Modi, Congress leader Priyanka Gandhi Vadra on Sunday alleged he is sad about a tweet by a “22-year-old woman” but not for the flood-ravaged people of Assam.

A day after Modi raised the toolkit issue and alleged Congress conspiracy in it at a poll rally in Chabua in Assam, the daughter of late Prime Minister Rajiv Gandhi, lamented that Modi was silent about people’s suffering in perennial flood and “attack on culture” by the Citizenship (Amendment) Act.

Last year’s flooding of the Brahmaputra and its tributaries during the pandemic affected some 2.8 million people in Assam.

“I was listening to the Prime Minister’s speech yesterday. He very seriously said that he was very sad about a development. I thought he would speak about Assam’s development or how BJP worked in Assam.”

“But I was shocked to hear that the PM was talking about a tweet by a 22-year-old woman. He said the Congress conspired to finish the tea industry of Assam. He was also sad about the Congress mistakenly putting two wrong pictures on social media,” Vadra said.

During his speech on Saturday, the prime minister apparently referred to Swedish environmentalist Greta Thunberg’s controversial toolkit, which she tweeted and then deleted, outlining ways in which people can participate in the farmers protest.

One of the points reportedly mentioned there was to “disrupt yoga and chai image of India in general”.

The Congress general secretary questioned Modi why he was not sad for the people affected by the flood and the anti-CAA movement, in which five youths were killed.

“Why didn’t you come to Assam when people were drowning? Why were you not sad when all the big promises by BJP were not fulfilled? Did you go to tea gardens and talk to workers about their problems?” she asked of Modi.

Vadra on March 2 visited a tea garden in Biswanath of Assam to interact with the workers and also tried her hands in plucking tea leaves, which was termed as “theatrics and drama” by the BJP leadership.

Talking about her visit to a tea garden during her last trip to Assam, Gandhi said she came to know about their lifestyle and realised that “the tea garden sisters are the protectors of culture and identity”.

On the prime minister’s frequently uttered statement of “double-engined” government in Assam, Vadra made fun of it saying the state currently has “two chief ministers”, in an apparent reference to rumours of powerful minister Himanta Biswa Sarma and Chief Minister Sarbananda Sonowal acting as rival power centres.

The Congress leader also alleged that all segments of the society, including youths, farmers and tea garden workers, have been cheated by the BJP government as it did not fulfil any of its promises made five years ago.

“Today, I think I will not speak about big issues, but the small problems of my sisters. You carry the biggest responsibility of the society. You run the home, bring up the children and also earn for the household.

“It is your life’s problems and realities. I don’t know them. My leaders don’t know them. You are my sister. So, please take a decision carefully for your future,” she appealed to the crowd, consisting mostly of women.

Vadra pointed out the BJP’s promises of 2016 such as 25 lakh jobs, protection of culture, implementation of Assam Accord and minimum wages to tea gardens, and alleged that none of these have been fulfilled.

Continuing her tirade against Modi, she said, “The PM also said Congress insulted Assamese culture and people won’t forgive us.

Now, is it not an insult to former CM Tarun Gogoi, who is no more today? Gogoi lived for Assam and worked for people till his last breath.

Vadra alleged the BJP’s sole aim is to “hand over” prime properties of Assam to Modi’s 2-3 close businessmen friends.

“The BJP wanted to hand over farmers’ land in Nagaon to a corporate body. When protests took place, a pregnant woman was attacked and farmers were jailed. They also brought an ordinance to sell land to anyone from outside without any permission,” she said.

Assam has huge unemployment problem, while several big scams have surfaced in the last five years, she alleged.

“How can you trust the BJP? You have seen what you have got in five years. Tarun Gogoi might have committed some mistakes, but he never cheated you. He did not bring the CAA and attacked your culture and identity,” she added.