Why do anything for govt which does nothing for us: Congress leader Priyanka Gandhi asks women 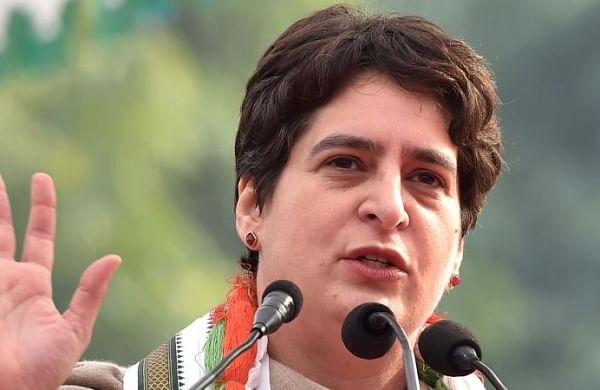 CHITRAKOOT: Congress General Secretary Priyanka Gandhi Vadra on Wednesday sought women’s support to her party in the upcoming Uttar Pradesh assembly elections asking them why to help a government which is doing nothing for them.

Priyanka Gandhi exhorted women to support her party weeks after promising to give 40 per cent of her party tickets to women candidates in the UP assembly elections next year.

Addressing a women gathering here as part of her ladki hoon, lad sakti hoon”(I’m a girl and can fight) campaign, the Congress leader asked them to rally behind her party saying she wants to be part of their struggle.

“I have come here to talk to you as you have to make up your mind. You are half the population, raise your voice. Come together and seek your rights in politics,”she exhorted women.

“Why are you helping the government which is doing nothing for you?”she asked.

“If a woman is contesting, close your eyes and vote for her without thinking anything else at the time of voting as she will keep standing for you and will be along with you in your struggle,” Priyanka Gandhi said seeking support apparently for female Congress candidates.

Gandhi also referred to her recent meeting with some ASHA workers who were earlier allegedly beaten up by police while trying to raise their demands at a public meeting of Chief Minister Yogi Adityanath.

“Will you get your rights if you seek them from the very people who beat you when you raise your voice?”she asked, adding You will have to fight for it, don’t ask for your rights from those who have committed atrocities.

“The AICC leader said in the one and a half years that she has been active in the state, she has seen the women’s struggle from close quarters and wants to be a part of their struggle and raise their voice.

In a lighter vein, she told women participants that her slogan ladki hoon, lad sakti hoon, does not mean going back home and fighting with husbands.

“Or else, they all will turn against me,” she said.

Referring to her party’s resolve of giving 40 per cent tickets to women, she said, “Your participation in politics is definite, the initiative that has been taken by the Congress cannot be reversed, women fighting in elections will bring a change in politics and society.

” No political party will be able to stop them, all will have to take the same initiative and give women their rights,”she asserted.

She also took a dig at the government’s free LPG cylinder scheme, saying, But the women are not able to get it filled because of high prices.

“The government thinks that all can be achieved by giving gifts, it does not want to recognise your strength, not help you move ahead. When you try to progress you face problems,” she said.