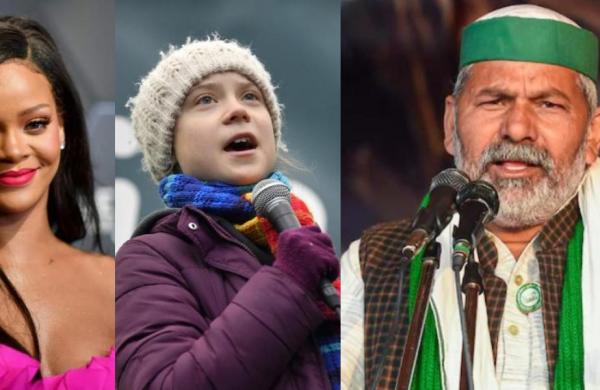 The 51-year-old Bharatiya Kisan Union (BKU) leader from the hinterlands of Muzaffarnagar in western Uttar Pradesh welcomed the support from international artistes and activists, including Rihanna and Greta Thunberg, although admitting he does not know them.

Talking to the media at Ghazipur on the Delhi-Uttar Pradesh border, Tikait, who is credited with reviving the agitation that had gone slim after the January 26 violence in Delhi, sought to know who these people were.

“Kaun hain ye videshi kalaakar? (Who are these foreign artists)?” Tikait said exhibiting unawareness when asked about the foreigners supporting the farmers’ movement.

“Koi videshi agar samarthan kar raha to kya dikkat hai, kuch le-de thodi na raha hai (If some foreigner is supporting the movement, then what is the problem. They are not giving us or taking anything away from us),” he said.

ALSO READ| US govt reaction to farmer protests must be seen in its entirety: Ministry of External Affairs

Commenting on a futile attempt of 15 members of parliament to reach Ghazipur and meet protestors earlier on Thursday, the BKU national spokesperson said the MPs should have sat on the ground on the other side of the barricading where they were stopped by the Delhi Police.

“Barricading laga rakhi hai inge. Unhe aana tha, we wahin baith jaate. We unghe baith jaate hum inge baithe the (A barricading has been set up here. The MPs had to come, but they should have sat down there itself. They would have been on the other side and we on this side (of the barricades),” he said.

Tikait said he did not have any talk with the 15 MPs who had tried to come to Ghazipur to meet the protestors. He added that they were also not allowed to speak to the protestors.

The 15 MPs from 10 Opposition parties, including the SAD, the DMK, the NCP and the Trinamool Congress, wanted to meet protestors at Ghazipur. Members of the National Conference, the RSP and the IUML were also part of the delegation.

Parliament member and Shiromani Akali Dal leader Harsimrat Kaur Badal, who coordinated the visit, said the leaders were not allowed to cross the barricades and reach the protest site, where thousands of farmers are camping since November with a demand that the government repeal the new agri-marketing laws enacted last September.

The farmers protest at Ghazipur, Tikri and Singhu at Delhi borders have now attained global spotlight with prominent international celebrities and rights activists talking about the stir.

In its pushback, the government said the facts on the issue must be ascertained before rushing to comment on it, and asserted that the “temptation” of sensationalist social media hashtags and views is “neither accurate nor responsible”.