‘What about the agony of families of BJP workers killed in TMC rule’: Amit Shah to Mamata on her injury 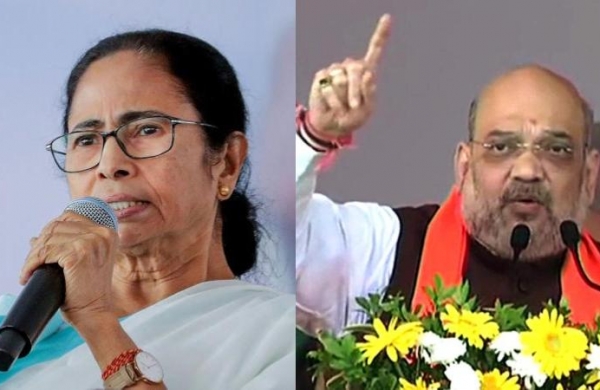 By PTI
RANIBANDH: Wishing Chief Minister Mamata Banerjee speedy recovery, Union Home Minister Amit Shah on Monday said that she is in pain due to her injury and wondered whether she could feel the agony of the families of BJP workers killed during TMC’s rule in the state.

Shah, who was addressing a poll rally here, said 130 BJP workers were killed by TMC goons.

He hit out at the TMC for not doing enough for the development of the minorities and introducing cut money culture in the state.

He promised that if BJP is voted to power in West Bengal in the ooming Assembly poll it will implement the seventh Pay Commission for the state government employees.

“Didi (elder sister) when you were hurt in your leg you felt pain. I wish you speedy recovery. But what about the pain of the mothers of 130 BJP activists who were killed by TMC goons? Did you ever try to feel their pain?” he said at the rally.ALSO READ | Bengal was once India’s leader now entangled in ‘goondaraj’: Amit ShaH”You never felt the pain of these people. They will give you a befitting reply while casting their votes in the assembly poll,” he added.

Banerjee was injured at Nandigram on March 10 while campaigning after filing her nomination for the seat where she will take on her former protege and now BJP heavyweight Suvendu Adhikari.

Ridiculing Banerjee’s allegations of an attack on her at Nandigram that left her injured in the leg, Shah said as per the EC’s report there was no attack on her.

Shah said, “I was going to come here for campaigning. Unfortunately my helicopter developed a snag and I couldn’t come to see you. But I won’t call it a conspiracy”.ALSO READ | ‘BJP will bring back Sonar Bangla’: Amit Shah tells voters ahead of WB Assembly elections

His comments come after BJP leaders from Bengal accused the TMC supremo of enacting a drama to seek sympathy votes in the upcoming assembly polls.

Banerjee was injured on March 10 and was admitted to SSKM hospital in Kolkata.

She was discharged on March 12.

Shah hit out at the TMC government for not doing enough for the development of minorities and said the Mamata Banerjee dispensation had indulged in corruption in tribal welfare schemes.

“TMC seeks cut money even for giving a tribal certificate. We will ensure the land rights of the tribals. The special focus will be on education, health and drinking water for the tribals in the area. We will also mention it in our manifesto,” he said.

In his virtual address Shah highlighted designated central schemes for the tribal communities which the state government did not implement properly.

“Special stress will be given to the education of tribal students. We will provide 50 er cent financial assistance those among them who score above 70 per cent,” he said.

Alleging that the TMC government has introduced “cut money culture” in West Bengal, Shah said BJP will change the situation in the state.

“This is BJP’s fight to make Bengal ‘Sonar Bangla’. Our goal is to ensure that there is a change in West Bengal’s situation, a change in the situation of the poor of the state. Our aim is to end infiltration and also transform Bengal,” he said.

The top BJP leader alleged that TMC is indulging in appeasement politics.

“Whenever there is a festive occasion such as Durga Puja, you all have to go to court to take permission for the processions under Mamata Ji’s rule. You all have to change this situation,” Shah said at the rally.

Reaching out to West Bengal government employees and said the seventh Pay Commission will be implemented in the state if the saffron party is voted to power.

Ranibandh is a part of the western district of Bankura which has a significant tribal population, crucial to any party’s electoral success.