West Indies no match for Williamson 97*, Latham 86 on opening day 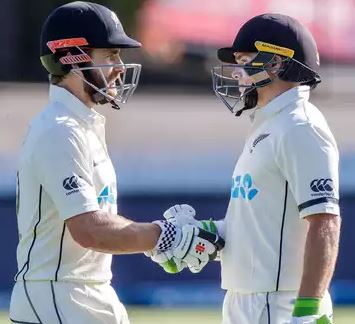 In the 54th over, Tom Latham bunt a rising delivery towards the forward leg fielder and attempted a quick single. Kane Williamson, at the other end, backed out and sent his partner back. With the ball in the hand of the close-in fielder and the batsman half-way down the pitch, it should’ve been an easy dismissal if the fielder hadn’t missed the direct hit. That was a lot of drama for one ball, but that was about it on a day that promised a lot.

On a pitch where the shade of green didn’t look any different from that of the outfield, West Indies had elected to field after rain and wet outfield had delayed toss by two hours. However, that would in no way deter Tom Latham and Kane Williamson, who spent several hours undisturbed and unfazed in the middle. Either the grass misrepresented the demons or the West Indies bowlers failed to use it to their advantage. Maybe, both.

Latham had brushed aside the concerns of the green much before the toss, stating that he has played enough cricket on such wickets, and he put every bit of experience on show – leaving and playing the deliveries with assurance en route his sedate but effective 86.

Williamson, too, wasn’t much different. There were 23 dot deliveries faced by him, before moving from 49 to his 33rd Test fifty. Untroubled, unflustered and yet in no hurry to cross the landmark — biding his time in the middle, much like Latham was from the other end, to negate the imposing threat. And soon after he nudged a delivery past the point region for a single to bring up his fifty, a duel effort was made to push the scoring rate past the 3-run-an-over mark.