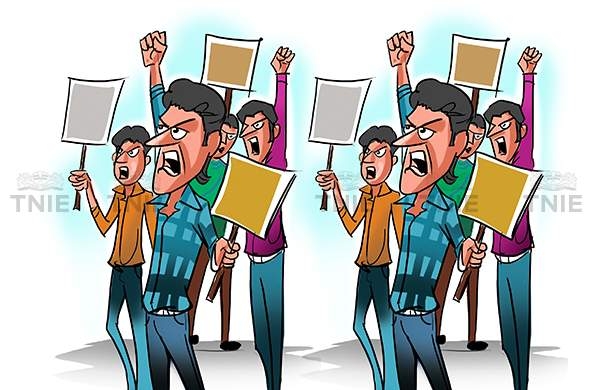 By PTI
KOLKATA: Disgruntled students hit the streets in different parts of West Bengal on Monday, the second time since the publication of the state higher secondary results on July 22, demanding that they be declared as passed and their marks be increased as no examinations were held this year due to the COVID pandemic and evaluations were based on previous results.

A number of students agitated at Ananda Ashram Bidyalaya at Naktala and Shyambazar AV School in different parts of city demanding their marks be raised, while at Basanti and Bisnupur in South 24 Parganas district and Domkal in Murshidabad district the candidates demanded they be declared as passed.

At Domkal Higher Secondary School, a section of students even damaged the furniture of a office room from where mark sheets were being distributed alleging that they were being unfairly held back though no exams had taken place, the reports said, Police went to the spot and there was no further untoward incident.

At Bisnupur and at Naktala the agitating students blocked roads disrupting traffic. They later lifted the blockades after the police persuaded them to do so. In some schools the students, accompanied by guardians, gheraoed the head masters, eyewitnesses said. “We have sent report to the West Bengal Council for Higher Secondary Education about today’s incident,” the headmaster of the school at Naktala said.

School education department sources said the district inspectors of schools of the districts where such protests took place have been asked to visit the concerned institutions and send their reports about the reason behind the students’ grievances at the earliest.

A girl student of the 166-year-old Shyambazar AV School told reporters “When no exams were held how come some of us got 29 in practicals and some only 9. We demand immediate action by the Council.”

The students said they were baffled by the Council’s evaluation process. “As no examination was held due to the COVID-19 situation then why the discrimination ? Either all of us be declared as passed or failed,” many of them said.

Of the 8,19,202 higher secondary candidates, 97.69 per cent of them have passed the examination this year. About 20,000 of them have been declared unsuccessful. An evaluation method had been worked out this year based on marks obtained by an examinee in the Madhyamik (class 10 examination) and best of four subject scores in class 11 annual examination.

The assessment marks in class twelve practical s in the case of science students and projects by humanities students were added in the evaluation criteria. The evaluation was praised by principals of different colleges and authorities in the state run universities as being scientific, fair and dynamic.

The educationists had expressed the fear that marking 100 per cent as passed and 90 per cent as first division holders in Secondary Examination (class ten board exams), result of which was declared earlier, will create crisis and deficit of seats in higher secondary institutions.