West Bengal has made up its mind for ‘poriborton’, says PM Modi 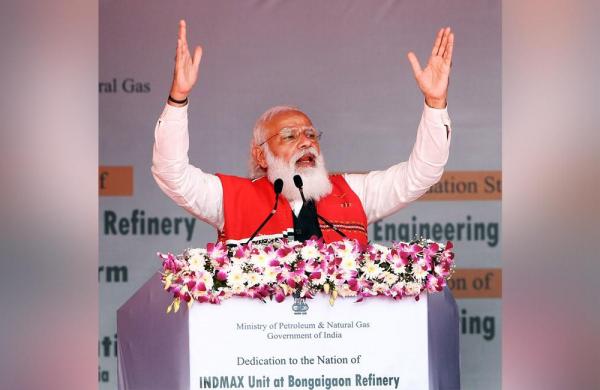 By ANI
HOOGHLY: Prime Minister Narendra Modi on Monday asserted that poll-bound West Bengal has made up its mind for ‘poriborton’ (change).

During his second visit to the state this month, Prime Minister is scheduled to inaugurate the extension of Metro Railway from Noapara to Dakshineswar and flag off the first service on this 4.1 km stretch constructed at a cost of Rs 464 crore.

While addressing a public meeting in Hooghly, Prime Minister said, “Today, Bengal is taking a big step to prove its resolve for fast development. Last time I came here to give you the gift of gas connectivity and infrastructure projects. Today, important works to strengthen rail and metro connectivity are going to be inaugurated,” PM Modi said.

“Modern highways, railways, airways, infrastructure of many countries helped those nations to become modern, where it became a major cause for positive change. Our country should have done the same thing decades ago. But it did not happen,” he added.

Addressing the huge crowd at the meeting, PM Modi said, “This enthusiasm and energy by all of you is sending a message from Kolkata to Delhi. Now West Bengal has made up its mind for ‘poriborton’ (change).”

“This year ‘rail and metro’ connectivity is Centre’s priority. Such work should have been done decades back and now, we should not delay any projects, from broadening of rail lines to electrification work, money being invested in infrastructure projects,” he added.

In West Bengal, the Prime Minister will inaugurate the extension of Metro Railway from Noapara to Dakshineswar, and flag off the first service on this stretch. This 4.1 km extension has been constructed at a cost of Rs 464 crore, fully funded by the central government. It will decongest road traffic and improve urban mobility. This extension will ease out access to the two world-famous Kali temples at Kalighat and Dakshineswar, for lakhs of tourists and devotees.

The two newly built stations namely Baranagar and Dakshineswar have modern passenger amenities and are also aesthetically designed and decorated with murals, photographs, sculptures and idols.

Prime Minister Modi will also inaugurate the third line between Kalaikunda and Jhargram over a stretch of 30 km of the 132 km long Kharagpur-Adityapur Third Line Project of South Eastern Railway, which was sanctioned with an estimated cost of Rs 1,312 crore.

He will dedicate to the nation the doubling of Azimganj to Khargraghat Road section, which is a part of the Howrah-Bandel-Azimganj section of Eastern Railway, which has been laid at a project cost of about Rs 240 crore.