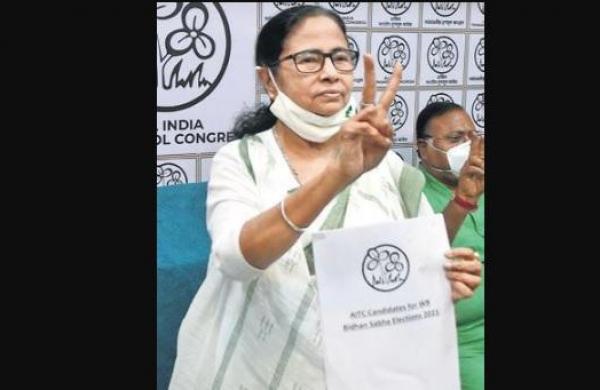 Express News Service
KOLKATA: The Trinamool Congress on Friday announced candidates for 291 of the 294-Assembly seats, fielding young and new faces including actors and sportspersons. TMC supremo Mamata Banerjee will fight from Nandigram in East Midnapore district. The Gorkha Janmukti Morcha will be given three seats. Of the 291 TMC candiates, 114 are new faces, which works out to over 39%.

The party has dropped octogenerian MLAs. Finance minister Amit Mitra and technical education minister Purnendu Basu will not contest. Besides, As many as 28 sitting MLAs, including five ministers, have been left out. “We are fielding 51 women candidates, up from 45 in 2016 Assembly elections,” said Mamata. Among the candidates are nine actors, two sportspersons and a retired IPS officer.

The decision to give women more tickets is a calculated strategy to tap the rise in women vote share. “According to the final list released by the Election Commission, women voters in Bengal form 49% of the total. The gender-ratio improved from 956 in 2019 to 961,” said a TMC leader Notably, the number of minority candidates has been reduced to 40 from 57 in 2016.

But at the same time, the party has given 79 tickets to those hailing from the scheduled caste (SC) community even though only 68 seats are reserved for the category. It means, SC candidates will contest on TMC tickets in 11 Assembly constituencies, which are not reserved for any category. Fielding SC candidates in unreserved seats will send a message to Dalit voters and those belonging to the Matua community, whom the BJP is desperately trying to woo, said a leader.

The BJP had enjoyed Matuas support in the 2019 Lok Sabha elections. “Since the saffron camp failed to fulfil the promise of giving Matuas citizenship by implementing the CAA, Mamata took this move to bring back Dalit support,” said a leader of the ruling party. Seventeen candidates from scheduled tribe (ST) community have also been given tickets against 16 seats reserved for STs. Tribal film actor Birbaha Hansda will contest from Junglemahal’s Jhargram constituency, which is not a reserved seat.