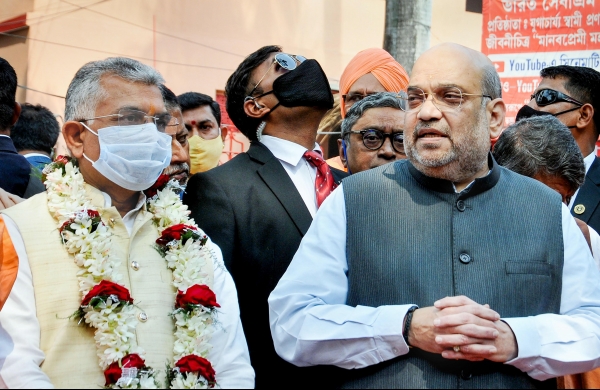 By Express News Service
KOLKATA: Taking a lesson from the unexpected intra-party rebellion over triggered by the candidature of scores of Trinamool Congress (TMC) turncoats, the BJP high-command, in its latest list of 157 candidates, decided not to include the ruling party’s faces in the fray.

When the previous lists included more than 70 TMC turncoats, the Thursday’s list included only three ruling party’s defectors other than 10 MLAs.

“The large-scale demonstrations in front of the party’s election headquarters at Hastings in Kolkata and other parts of South 24-Parganas, Howrah and Hooghly districts were triggered by the party’s decision to field the TMC turncoats who joined our party very recently. This party high-command was not happy with the intra-party rebellion and decided to give the party’s old workers priority,” said a senior BJP leader in Kolkata.

Irked by the party’ internal feud that surfaced publicly, Union Home minister Amit Shah, who was visiting Bengal and Assam on Monday and scheduled to fly to Delhi on the same day, landed in Kolkata and held an unscheduled overnight meeting with the Bengal functionaries and national leaders, who were camping in the state. The meeting continued till dawn on Tuesday. Before leaving for Delhi, Shah asked Bengal functionaries with the list of candidates for next phases to attend an emergency meeting in the national capital.

Though the Thursday’s candidate list axed many TMC turncoats, incidents of ransacking and protests took place at least three places in the state shortly after the announcement. Roadblocks were put up at Jagaddal in protest of turncoat TMC MLA from Nadia’s Shantipur Arindam Bhattacharya’s candidature from the North 24 Parganas district constituency.

In Jalpaiguri, angry BJP supporters ransacked the district party office as they were not happy with the candidates announced on Thursday.  “It was a rift between the party’s old workers. There many aspirants who wanted to contest in the upcoming Assembly elections but denied ticket,” said a BJP leader.