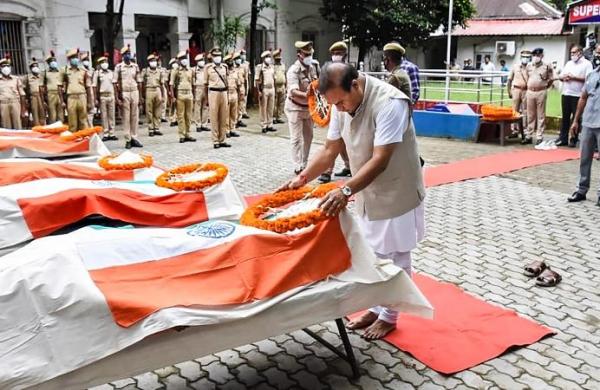 By Express News Service
GUWAHATI: Assam will raise three “commando battalions” to man the interstate border with Mizoram even as Chief Minister Himanta Biswa Sarma said “we will die but protect our land.”

“We are raising three commando battalions to protect our land in Cachar, Karimganj and Hailakandi districts. They will have a combined strength of 4,000 personnel. We don’t want others to encroach upon our land,” Sarma told journalists at Silchar in Assam’s Cachar district.

He also said that the Assam government would move the Supreme Court for status quo on the interstate border and to ensure that the reserve forests were not destroyed by anybody.

“After Monday’s incident, some civilians (in Mizoram) rejoiced as if it was a fight between two countries. The message we want to give is that we will die but we will protect our land. We are firm that we will not allow even an inch of our land to be encroached upon,” Sarma said.

The CM said the state sacrificed five precious lives but managed to secure its land.

“Assam does not believe in taking revenge and will not launch a counter-attack as it is not in our DNA. I cannot ask my police to fire on the Mizo civilians. Assam is acting responsibly. Despite provocation, we told the police to give security to every Mizo living in Assam,” Sarma said.

We are firm on our stand to protect the territorial integrity of Assam at any cost.At the same time, we will ensure safety of all civilians, either of Assam or from Mizoram. pic.twitter.com/CIoCXl7XUn
— Himanta Biswa Sarma (@himantabiswa) July 27, 2021

Referring to some recent incidents of bomb blasts on the border and Monday’s violence, he said, “How can you use bombs and bullets to settle a dispute? It is not between two countries.”

ALSO READ | Day after border violence, Assam, Mizoram refuse to back down, hurl charges at each other

The CM sniffed at suggestions that some recent actions of his government could be among the reasons behind the violence.

“There are various activities going on in Assam. We are blocking the (fleeing) Myanmar nationals from moving towards (Assam’s) Dima Hasao. We strongly suspect that there is a drug route that originates in Myanmar and goes to Punjab via Mizoram and Assam. We have cut that line by regularly seizing drugs…

“Then, we introduced the Assam Cattle Preservation Bill, 2021. There are rumours that beef will not be available in the Northeast. These steps might have angered some civilians and non-state actors,” the Assam CM said.

People from Myanmar’s Chin province and the Mizos in India belong to the Zo ethnic group and they share the same ancestry.

Sarma said Mizoram CM Zoramthanga had favoured chief secretary-level talks and the talks took place in Delhi earlier this month. He said at the end of the meeting with Home Ministry officials, the two sides were supposed to sign a memorandum but the Mizoram chief secretary refused to sign it.

“Later, the Mizo transgression started in Cachar, Karimganj and Hailakandi districts. The Assam Police thwarted the attempts while the government was constantly in talks with Mizoram,” Sarma said.

He said during his and Zoramthanga’s telephonic talks with Union Home Minister Amit Shah on Monday, he spoke about the identification of the boundary with satellite images.

He said Mizoram failed to grab Assam land from May 10 when he donned the CM’s mantle. The police personnel have been adequately deployed to the border and they are taking positions, he said.

Sarma said as directed by the Centre, the Assam Police left the site but the Mizoram Police personnel were still there.

He said the border, demarcated at the time of Mizoram’s creation as a Union Territory in 1972, had to be recognised, and not the British era demarcation.

He rubbished Mizoram’s charge that Assam is pushing “Bangladeshis” to the reserve forests, stating that the law says there cannot be any settlement in reserve forests.

Earlier in the day, Sarma paid homage to the slain jawans. The state government will pay ex gratia of Rs 50 lakh each to their families and Rs 1 lakh each to the injured. Also, the personnel deployed to the Mizoram border will get one month’s additional pay.