We will sit here till October 2: Farmer leader Rakesh Tikait 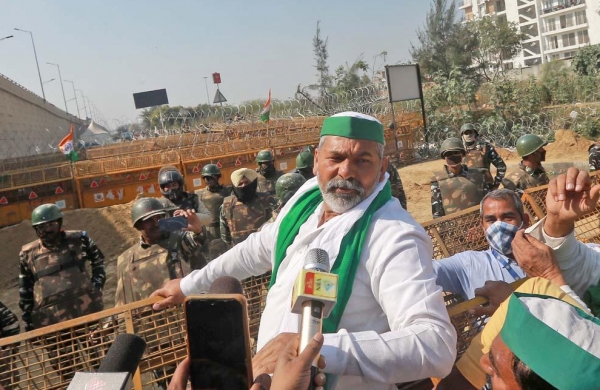 “We will sit here till October 2,” said Tikait, the national spokesperson of the Bharatiya Kisan Union (BKU), who is camping with his supporters on a stretch of the Delhi-Meerut highway since November.

Interacting with the press, he claimed a few inputs had been received regarding some “miscreants trying to disrupt peace” during the “chakka jam” that was announced for 12 noon to 3 pm on Saturday.

“Because of these inputs, we had decided to call off the ‘chakka jam’ in Uttar Pradesh and Uttarakhand,” the 51-year-old Tikait, credited with reviving the farmers’ stir, said.

Amid a stringent security set up installed around the Ghazipur protest site, the farmer leader, flanked by his supporters, also interacted with Delhi Police officials.

“Nobody can touch the farmlands, the farmers will protect it. Both farmers and soldiers should come forward for it,” Tikait said.

Interacting with security personnel who were on the other side of the barricading, he said, bowing his head and folded hands, “My pranaam (a respectful salutation) to you all. Now you all will protect my farms.” Besides Ghazipur, thousands of farmers are encamping at Tikri and Singhu border points of Delhi since November with a demand that the Centre repeal the three contentious agri-marketing laws, saying these would hurt their livelihoods.

However, the Centre, which has held 11 rounds of formal talks with the protesting groups, has maintained that the laws are pro-farmer.