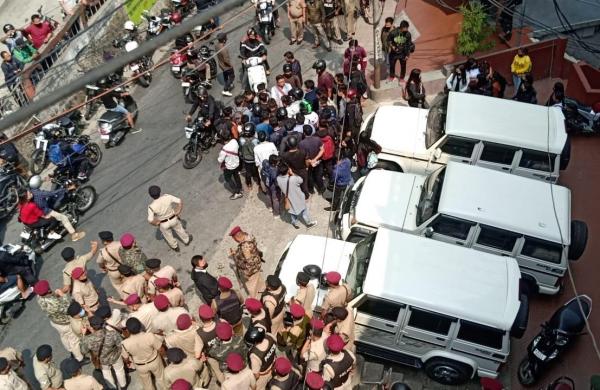 Express News Service
GUWAHATI: A lady IAS officer in Mizoram, heading the state’s Department of Higher and Technical Education as the Director, has been asked to move to another department by a students’ organisation that cited “conflict” and “communal issues” as the reasons.

On Tuesday, the members of the Mizo Students’ Union (MSU) put up barricades in front of the office of the Higher and Technical Education Directorate in Aizawl to prevent its Director Nazuk Kumar from attending duties. They want a local to head the department.

“… In the past exams, there have been many conflicts regarding the category which raised communal issues. Therefore, MSU always demands a local person in order to prevent such problems,” the students’ body wrote in a letter to the 2016 batch IAS officer two days ago.

It requested her to leave the department for the welfare of students and seek a new post under the Government of Mizoram.

Kumar came to Mizoram in January from Chandigarh and joined the Department of Information and Communication Technology as its Additional Secretary. Later, she was transferred to the Department of Food, Civil Supplies, and Consumer Affairs as its Director and then, to the Higher and Technical Education Department.

MSU general secretary Samuel Zoramthanpuia said the allotment of seats for medical and technical courses triggered protests in the past when a non-Mizo officer was heading the department.

“We have nothing against her (Kumar’s) personally. We want a local to hold this important post as it involves the careers of indigenous students,” he said.

Suhas Chakma, who is the director of Rights and Risks Analysis Group, said the state government must not get influenced.

“If students’ organisations were to decide posting of IAS officers of their choice, it shall mean the abdication of responsibility by the state government to the non-state actors and a constitutional failure. The state government must stand firm or else, there shall be no end to the slippery slope,” Chakma said.

There have been instances of protests in the past when seats were allotted to students belonging to the Chakma community under Category-I of the State Medical and Technical Entrance Examination. The Chakmas have an autonomous council in Mizoram but many view them as “outsiders”.

When 38 Chakma students were allotted seats for medical and technical courses in 2015, it had triggered massive protests in the state, prompting the government to amend The Mizoram (Selection of Candidates for Higher Technical Courses) Rules, 1991.

There are two other categories under which seats are allotted. Category-II caters to the children of non-local permanent residents while Category-III is for children of Central or state government employees not permanently serving in the state.