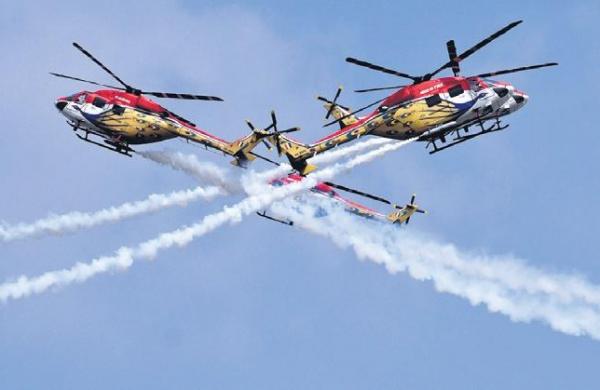 By Express News Service
BENGALURU: In a tangential way, Defence Minister Rajnath Singh sought to reaffirm and redefine India’s traditional role in the Indian Ocean Region (IOR) as against China’s aggressive agenda, by offering to take on the task of being a net security provider in the IOR. “India can be a reliable partner in the region and we can take on the role of being a net security provider here,” said Singh here on Wednesday.

Addres s ing the Chiefs of Air Staff conclave, attended by senior officers from 26 countries, he emphasised the need for these countries to work together and towards the common goal of maintaining peace in the region. The conclave is one of the highlights of Aero India 2021 that started on Wednesday, and senior officers from friendly nations are attending the twoday session virtually. Singh said IOR is one of the most densely populated regions in the world and is prone to natural calamities that cause extensive damage to lives and properties.

India can be a reliable partner as it looks forward to cooperation from friendly countries to create a more stable environment, he added. He said that new technologies are changing the way battles will be fought in the future and India is focused on building those capabilities. On the role played by the Indian Air Force and its drive for self-reliance, he said that India’s defence acquisition policy has created an ideal environment and it is the best time for foreign firms to invest in the country.

Air Chief Marshal RKS Bhadauria said there is a need to enhance cooperation among air forces of friendly nations. The advent of new technologies has complicated the art of fighting wars and a threat may emanate several time zones away but can have an impact at some other place.

Air Chief Marshal RKS Bhadauria added, “We are closely watching the threat posed by technologies like drones. The Indian Air Force is developing capabilities in unmanned aircraft and anti-drone capabilities and technologies.” He said that LCA Tejas is one of the best aircraft in its class and IAF is also developing an advanced medium combat aircraft.Senior officers from Australia, New Zealand, the United Kingdom, the USA, Iran, Bangladesh, Kazakhstan, Tanzania, Sri Lanka, Thailand, UAE, Qatar, Myanmar and other countries are taking part in the conclave.

CM: MRO UNITS PLANNED IN B’LURU, HASSAN Chief Minister B S Yediyurappa on Wednesday said the State Government is planning to set up maintenance, repair and overhaul (MRO) facilities near Kempegowda International Airport at Devanahalli, and in Hassan. The acquisition of land for the Hassan airport project is completed, while an aerospace park near KIA was set up in 2008. With excellent connectivity and surplus power, it is the best state for investment in defence and aerospace sectors, he said