the Lilagar River, Water has entered 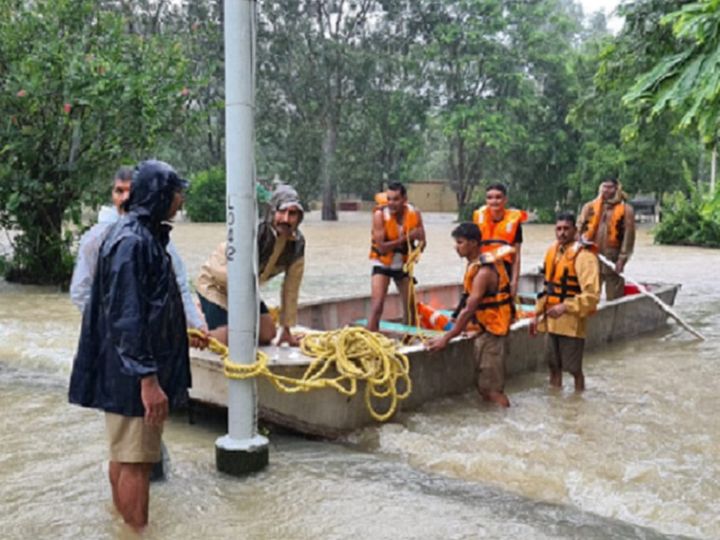 Janjgir : Things have worsened due to the continuous rains in Janjgir of Chhattisgarh. Water has entered the village due to floods in the Lilagar River. Many families are trapped due to this. The administration has been requested to protect them. At the same time, the colony of Nuvoco Vistas Cement Plant is flooded. During this time, a young man died due to drifting while trying to save people.

The young man, who came home a day earlier, was married a year ago
, the colony remains in the Nuvoco Vistas cement plant, about 15 km from Akaltara. Smit Singh (31), who lives in the same colony, is an employee of the plant. On hearing the sound of strong water at around 3 in the night, Smit woke up and saw that the colony was flooded. On this, with the help of rope, he started saving people trapped. Smit saved many people, but suddenly the rope broke.

Smit got swept away as the rope broke. His body was later found. Smit was married only a year ago. She has an 8 month old baby girl. Smit was the only son. This time he also contested the election of a councilor from Akaltara on a Congress ticket. Was defeated though. It is being told that Smit lived with his tau in Akaltara. He came home the day before.

Villagers are stranded in the village of Dighora since night, water entered the houses
and the Lilagar river is in spate due to rain. The flood waters have entered the nearby village of Dighora. Due to this the township is submerged. People’s houses are flooded. It is being told that 10 families of the village have been trapped in the floods. These villagers have been stranded since night. To save them, we have requested administration and governance. The sarpanch of the village confirmed that more than 20 people were trapped in the flood.