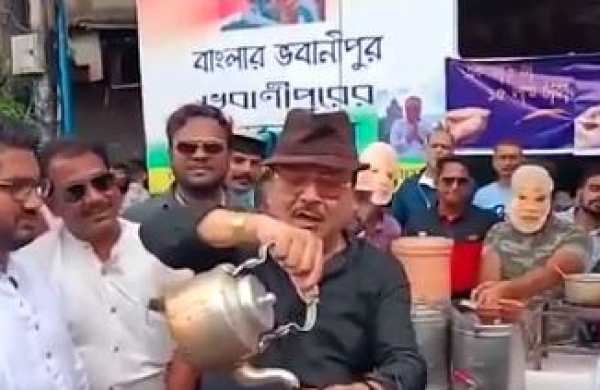 By PTI
KOLKATA: TMC MLA Madan Mitra on Sunday donned the role of a ‘chaiwala’ (tea-seller) and symbolically pegged the price of one cup at Rs 15 lakh.

A former state transport minister, Mitra alluded to allegations of the Trinamool Congress and other opposition parties that Narendra Modi’s 2014 poll promise to credit Rs 15 lakh to every citizen’s bank account is yet to see the light of the day.

The Kamarhati MLA, who is hugely popular among netizens, said that he offered tea for free to people assembled at an event in Bhowanipore area in Kolkata but pegged the price of a cup at Rs 15 lakh for people willing to shell out the amount, especially “those close to Modiji”.

“This is a special tea. I hope it matches the taste of the tea made by Modiji when he was a chaiwala at railway stations, as claimed by him. I am offering this for free. But if you ask me the price, it costs the same as promised by him to every Indian — Rs 15 lakh,” said a turbaned Mitra with a kettle in hand.

The irrepressible TMC legislator, a former aide of Chief Minister Mamata Banerjee, had in the past ridden a bullock cart in protest against spiraling fuel prices.

Mitra, whose sartorial taste has even been complimented by rival BJP leader Dilip Ghosh, is popular among netizens, especially the youth, for his Facebook lives.