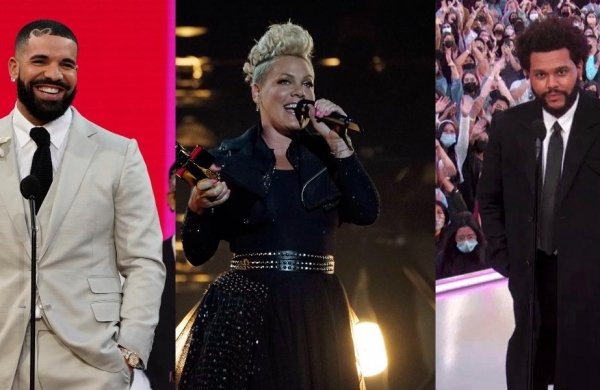 By PTI
LOS ANGELES: The Weeknd’s ode to lost love “Blinding Lights” did wonders for the singer as he topped 10 of the 16 categories he was nominated in at the 2021 Billboard Music Awards (BBMA), which also saw Korean pop sensation BTS expand their global reign with four wins.

The Weeknd thanked his parents and fans, promising them that he does not take the success “for granted”.

In the winners’ list, The Weeknd was followed by the late Pop Smoke with five trophies, and BTS and Bad Bunny with four awards each.

Pop Smoke, whose real name was Bashar Barakah Jackson, was only 20 years old when he was killed in February last year.

His mother, Audrey Jackson, received the awards on his behalf and remembered him in a moving speech.

“Thanks to all the fans for respecting his life and the spirit of my son. He created music for children who have to sleep four in the room, children who need to understand how to graduate and go to school every day to be proud of their mother.

“He did this, so the 14-year-old didn’t have to kill to prove who they were,” she said referring to the unidentified teen charged with her son’s murder.

The ceremony took place in front of a fully vaccinated, fully masked live audience in the plaza outside Los Angeles’s Microsoft Theatre.

I started this last week by taking a brutal tumble on a bike fracturing my rib and ended it hosting the @bbmas with my incredible wife by my side who helped me every step of the way to recover and feel my best. I love you @priyankachopra. pic.twitter.com/DrogMP0nZR
— NICK JONɅS (@nickjonas) May 24, 2021

The winners entered the stage via enclosed backstage area to accept their awards.

Korean pop sensation BTS, who joined the ceremony virtually from Seoul, South Korea, emerged winners in all the four categories they were nominated in.

The hit septet, comprising RM, V, Jin, Suga, J-Hope, Jimin, and Jungkook, took home the award for top selling song for their first English single “Dynamite” and lit the up the BBMA’s stage with their debut performance on “Butter”, their second English single.

BTS, whose full name is Bangtan Sonyeondan (Bulletproof Boy Scouts) or Beyond The Scene, their English branding, also received the top social artist award, for the fifth consecutive year.

“Top social artist for the fifth consecutive time. Thank you ARMY and BBMAs for such an incredible title,” J-Hope said in a video shared by the Billboard Music Awards Twitter handle.

R&B artiste Drake received the artist of the decade award for his triumphs in the 2010s.

Drake was joined by his son Adonis, mother Sandi Graham, father Dennis Graham and several friends as he accepted the honour.

“I rarely celebrate anything. And just for anyone watching this that’s wondering how this happened, that’s really the answer: being so unsure how you’re getting it done that you just kind of keep going in the hopes of figuring out the formula.

“I just know that I’ve spent an incalculable amount of hours trying to analyze all the things I did wrong, but tonight for once I’m sure as hell we did something right,” he said.

He won the trophy for top streaming songs artist.

Drake remains the most awarded BBMAs honouree of all time.

The ceremony, hosted by singer-actor Nick Jonas, saw some performances that took place live at the venue, including those by Twenty One Pilots, AJR, Glass Animals and DJ Khaled with H.E.R. and Migos.

Apart from the top honours, most of the awards were presented off-camera.

Honestly everything about her is beyond perfect #PriyankaChopra #BBMAs pic.twitter.com/8Y1rWK0tzM
— Fendi (@being_Fendi) May 24, 2021

About last night Swipe for some looks from the #BBMAs Comment your fave look below pic.twitter.com/wVaTEF7nUa
— boohoo (@boohoo) May 24, 2021