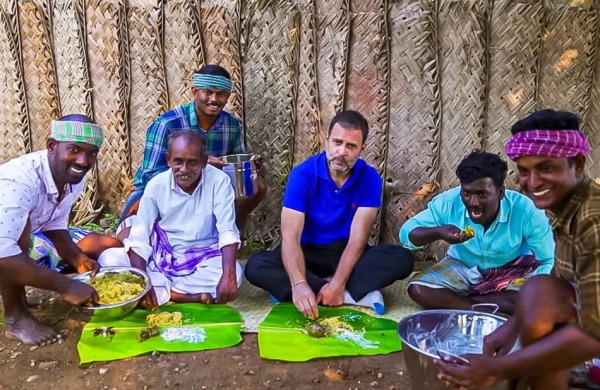 ‘Village Cooking Channel’ is known for their cooking videos in which a group of six persons from Chinnaveermangalam village near Aranthangi at Pudukkottai district prepares food in rustic style and then distributes it to the poor and needy.

During its programme on January 25, the channel’s chefs Periyathamabi (70), Murugesan, Aiyyanar, Muthumanikam, Tamil Selvan, and Subramanian were surprised as they were told that a special guest would arrive at their kitchen to lend them a helping hand.

The guest was none other than Congress leader Rahul Gandhi who was accompanied by Karur MP Jothimani. The chefs and villager were dumbfounded by the leaders’ presence. Rahul Gandhi is seen helping the chefs in preparing the food. “Vengayam, Thayir, Kalluppu,” exclaimed Rahul as he learns the Tamil words for onion, curd and rock salt while preparing the raita along with the villagers.

The video, recorded during Rahul Gandhi’s visit to Karur on January 25, has so far garnered over 42 lakh views on the social media platform.

In addition to cooking, the video also has the YouTubers and Rahul interacting leisurely as they wait for their dish to be served. Jothimani was seen translating as Rahul interacted in English. One of the YouTubers addressing Rahul as ‘anna’ and the latter posing with other YouTubers for the video’s thumbnail picture won hearts among the viewers.

One of the members from the YouTube Channel, Subramanian said: “It was a surreal moment for us. Such a VVIP visiting and helping us in cooking was really surprising. We are awestruck by his simplicity, humility and the way he conducted himself around a bunch of village cooks. Apart from that, we were delighted to know that he has been regularly watching our videos. He has promised us to lend all kinds of help for our future endeavours.”

At end of the video, Rahul is seen asking the cooks to prepare their special dish — winged-termite curry — during his next visit. The Youtubers said they will organise that programme for their subscribers.

Later, in his pre-meal chat, he lauds the group and asks them what they want to do when one of them is seen saying he wants to go to the US, to which Gandhi replies he can try to organise it through “good friend” Sam Pitroda.

Later, the Congress leader and the others are seen enjoying the spicy mushroom biryani, in true Tamil style where the food is served on plantain leaf and all of them are seated on the ground.

During the meal the Congress leader lauded the makers, saying the food was “romba nalla irukku” (it is very nice, in Tamil) even as he is seen enquiring what other delicacies they can cook.

“I enjoyed the food very much..excellent Tamil food, super,” he said and wished the group before leaving.