WATCH | ‘I didn’t smell him, I’m not a dog’: Youn Yuh Jung responds to media after viral moment with Brad Pitt on Oscar stage 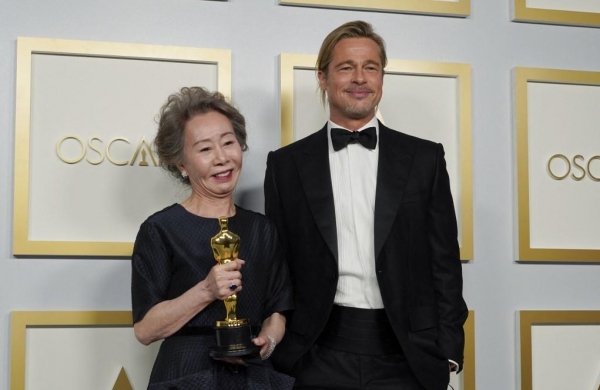 By ANI
WASHINGTON: Youn Yuh Jung, who bagged Oscar for Best Supporting Female Actor for ‘Minari’, has been hogging the limelight for the adorable remarks she made about Brad Pitt in her winning speech.

It seems the ‘Minari’ star has a ‘fan girl’ inside her which shed its inhibitions after seeing the charming ‘Moneyball’ star in front of her.

Youn, who delivered perhaps the most memorable acceptance speech of the 2021 Oscars, has been trending over social media since she made adorable onstage remarks about ‘Minari’ executive producer Brad Pitt after he presented her with Best Supporting Actress.

“Mr Brad Pitt, finally. Nice to meet you. Where were you while we were filming in Tulsa? Very honored to meet you,” she said to Brad while he bashfully smiled at her.

The limited crowd at L.A.’s Union Station laughed at Youn’s remark, perhaps thinking it was a playful flirtation.

Not only this, the 73-year-old performer kept the quips coming backstage too. According to E! News, when a reporter asked what she talked about with Pitt and if she could describe how he smells, Youn replied with a laugh, “I didn’t smell him. I’m not a dog.”

#Minari star and Academy Award winner Yuh-Jung Youn responds to a question backstage at the #Oscars about what Brad Pitt smells like: “I didn’t smell him, I’m not dog.” pic.twitter.com/eZs6YGq60V
— Film Updates (@TheFilmUpdates) April 26, 2021

She went on to say she has been a fan of Brad since he was “young,” and that she “couldn’t believe” it when he announced her name to present her with the Oscar.

“Maybe I just blacked out a couple of seconds,” she continued. “What should I say, ‘Where am I?’ or something like that? But I kept asking my friend, ‘Am I saying it right? Do they understand what I’m trying to say?'” she added with a laugh.

E! News reported that Youn also praised the ‘Mr and Mrs Smith’ actor for the way he said her name during the ceremony.

“I can tell he practised a lot–he didn’t mispronounce my name. That moment, when I got there, I [was] just lost. What I was supposed to say, ‘Should I begin?’ or something?,” she shared.

In Minari, Youn played the role of Soon-ja, “grandma” to young David, who comes from Korea to stay with the family on their farm in Arkansas. She brings with her the “minari” seeds that give the film its title.

‘Minari’ has been directed by Lee Isaac Chung and it stars Steven Yeun, Han Ye-ri, Alan Kim, Noel Kate Cho, Youn Yuh-Jung, and Will Patton. The film is a semi-autobiographical take on Chung’s upbringing and the plot follows a family of South Korean immigrants who try to make it in rural America during the 1980s.

The 93rd Academy Awards ceremony took place two months later than originally planned, due to the impact of the COVID-19 pandemic on the entertainment industry.