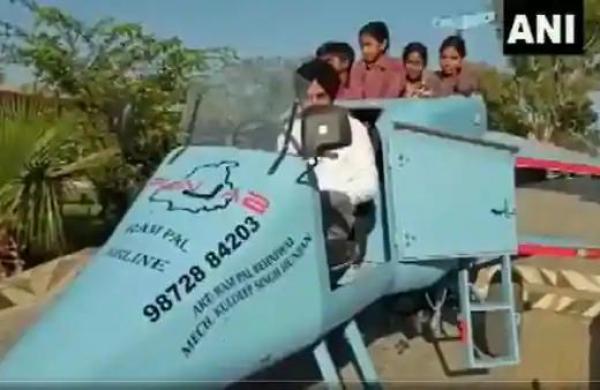 By ANI
BATHINDA: Rampal Behaniwal, an architect from Bathinda’s Ram Mandi, has designed ‘Punjab Rafale’, a jet-shaped vehicle that runs at 15-20 kmph on roads.

“The vehicle cost me about Rs 3 lakh and will be displayed in my cultural park which will be launched soon. People who can’t afford to fly in an aircraft can fulfill their dream here to some extent,” said Behaniwal.

‘Punjab Rafale’ has attracted a lot of attention on the internet and many people even reached Rama Mandi to see the ‘ship’ on road.

Earlier in 2019, Behaniwal had designed a railway engine from scrap, which has been installed in the refinery of the township.

The vehicle is nine feet wide and 18 feet long. The engine and gear of a Maruti car have been used in the ‘Punjab Rafale’ along with a new chassis. It has four tyres – the front two are smaller, while the rear tyres are larger.

“I got the inspiration to build this vehicle when I saw a video of Rafale jets reaching Ambala. I watched those snaps many times and designed this with the help of mechanic Kuldeep Singh,” said Rampal Behaniwal.

“The fans were added after the full design with the chassis was completed. Then Gursavek Singh and Kuldeep Singh added the engines. Finally, the seats were fixed at a height to give the feel of an aircraft. Then a single silencer was fixed to get a good sound,” he further said.

“This vehicle will run on a track in my cultural park which will be launched soon. Children will have their confidence boosted on seeing this vehicle. They will know that they can build wonders if a common man like myself can do this much,” he added.

Gursavek Singh, car mechanic said,” Behaniwal came to the workshop with an already built body. He asked me to get the vehicle on the road. So I fixed the engine and completed the mechanical work. The engine and the gear of the Maruti have been used in it.”

“This 3 seater will go as fast as 20 kmph whereas Maruti can travel at 80 kmph. Initially, it will be a bit hard to drive this vehicle. If you drive daily and get used to it, then it will be easy to handle,” he added.

Gurtij Sekho a local said, ” I am feeling very proud that Ram Mandi has become famous because of Rampal Behaniwal. Many people are coming from far to see the vehicle”.