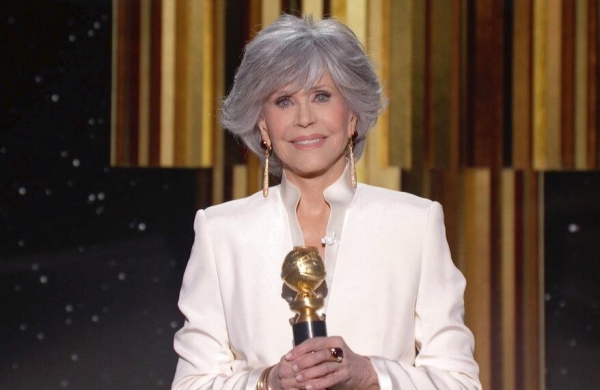 By Associated Press
LOS ANGELES: Just like in her career, Jane Fonda used the Golden Globes’ platform to speak on deeper issues calling for greater diversity in Hollywood while praising the “community of storytellers” as she accepted the Cecil B. DeMille Award.

While wearing an all-white suit, Fonda raised the Globes’ highest honor above her head Sunday before commending storytellers for their vital role in troubled times. She said stories let us “have empathy, to recognize that for all our diversity, we are all humans.”

“We are a community of storytellers, aren’t we, and in turbulent, crisis-torn times like these, story-telling has always been essential,” Fonda said.

The actor and social activist went on to call for Hollywood’s leaders to try to “expand that tent” for more diverse voices.

Fonda, 83, said there’s another “story we’ve been afraid to see and hear about ourselves in this industry, about which voices we respect and elevate and which we tune out, who is offered a seat at the table and who is kept out of the rooms where decisions are made.”

Her acceptance speech earned applause from Viola Davis, Glenn Close and Andra Day, who won best actress for her role in “The United States vs. Billie Holiday.”

Fonda was one of the few honorees to accept an award in person at the ceremony in Beverly Hills, California.

In a video package, Ted Danson called Fonda “confident and independent” while “Captain Marvel” actor Brie Larson referred to her as a “real life superhero.” Kerry Washington and Laverne Cox also paid homage in the video that offered several clips of Fonda’s activism and critically-acclaimed film roles such as “Klute,” “Coming Home” and “The Electric Horseman.”

Tina Fey and Amy Poehler presented Fonda the Globes’ version of a lifetime achievement award. Fey — who starred alongside Fonda in the 2014 film “This is Where I Leave You” — called her a movie star who is “open, generous and a hardworking actor.”

The DeMille award is given annually to an “individual who has made an incredible impact on the world of entertainment.”

“He would be very proud of me,” she said backstage about her father. “I feel that he is here. I feel his spirit.”

Fonda made an impact off-screen by creating organizations to support women’s equality and prevent teen pregnancy and improve adolescent health. She released a workout video in 1982 and was active on behalf of liberal political causes.

For her on-screen efforts, Fonda has been nominated for five Academy Awards and won for the thriller “Klute” and the compassionate anti-war drama “Coming Home.” Her other prominent films include “The China Syndrome,” “The Electric Horseman” with Robert Redford, and “9 to 5” with Lily Tomlin and Dolly Parton. She stars in the Netflix television series “Grace & Frankie.”

Fonda gained notoriety in the 1970s when she traveled to North Vietnam during the height of the anti-Vietnam War protests and posed for photos next to an anti-aircraft gun. She fell under hefty criticism for her decision — one she repeatedly apologized for — to pose in the photo that gave her the nickname “Hanoi Jane.”

In 2014, Fonda was given a lifetime achievement award by the American Film Institute. She launched IndieCollect’s Jane Fonda Fund for Women Directors, an organization aimed to support the restoration of films helmed by women from around the world.

Fonda was arrested at the U.S. Capitol while peacefully protesting climate change in 2019, an action dubbed Fire Drill Fridays.

For her 80th birthday, Fonda raised $1 million for each of her nonprofits, the Georgia Campaign for Adolescent Power & Potential and the Women’s Media Center. She also serves on the board of directors and made a $1 million donation to Donor Direct Action, an organization that supports front-line women’s organizations to promote women’s equality.

Fonda’s book, “What Can I Do? My Path from Climate Despair to Action,” released last year, details her personal journey with Fire Drill Fridays.