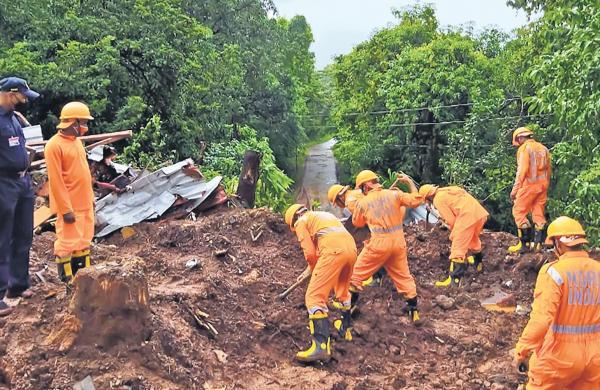 Express News Service
MUMBAI:  Residents of Taliye village in Ratnagiri district, Maharashtra, may have ignored a warning from nature that a landslide was imminent, leading to deaths of 49 people, with 47 still missing.

The locals said that on Thursday there was heavy rain and large quantum of muddy water started flowing down from the hilly areas. “This was the sign of danger. It means that something has happened on the hilly side, therefore muddy water with a lot of debris has been flowing towards their hamlet,” said Sachin Haralkar, a photographer.

The landslide struck Pandey Wadi, a small hamlet of 35 houses located at the foothills of the Sahyadri ranges. Villages in Konkan are clusters of such small hamlets. “Some of the residents of Pandey Wadi screamed and warned all that something wrong has happened and they need to run away to a safe place to save themsekves,” Haralkar said. Many villagers took to foot after the heavy rainfall on Thursday evening.

“But other people thought nothing will happen and they remained in their houses. They were confused and did not anticipate such large-scale devastation taking their lives. Then, one after another, parts of the hill started sliding down, bulldozing the kaccha houses of Pandey Wadi. Many people got trapped inside the debris while some of them were washed away in the heavy flow of water. Therefore, rescue teams such as those from NDRF and local authorities are not yet able to find the missing people,” Haralkar added.

Vijay Pandey, one of the Pandey Wadi residents, lost his seven-month-old son, two-year-old daughter, wife and parents. Pandey himsely could run away, but he was unable to get his entire family out of there, because in the unceasing heavy rain they did not want to go out. They did not imagine that such a tragedy can happen within a few minutes and destry their lives.

Aditi Tatkare, Guardian minister of the Raigad district, said that the many houses were washed away in the landslide and the heavy flood, making it difficult to trace the bodies. She said the the entire area is very muddy and that several layers of mud have to be removed to reach the original site of Pandey Wadi.

The local Sarpanch, Sampati Prakash Chandrakar, said that the government authorities were very late in reaching the location very late. “There was a communications issue. We called several people but no help reached on time. The layer of mud and debris become solid and that cannot be removed manually or easily. After 48 hours of the landslide, the JCB and other machinery came to remove the debris now,” Chandrakar said.