Voters should recognize the value of their vote and select the candidate of character: Shri TP Sharma 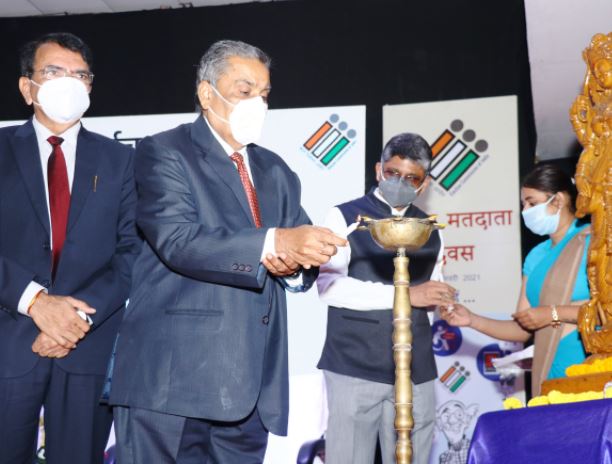 On the occasion of National Voters’ Day, Chief Minister of Chhattisgarh Public Commission, Lokayukta Justice TP Sharma said that voters should recognize the value of their vote and choose a candidate of character. He asked the voters to use 100 per cent of their franchise and vote fearlessly without any pressure and temptation. Mr. Sharma distributed voter ID cards (EPIC cards) to new voters. He told the voters that voters use the EPIC card only for identification, but must use it for whom it is found. He congratulated the officials and employees associated with the election for successfully conducting the Marwahi Assembly by-election in Kovid period. Shri Sharma said that when officers and employees associated with elections are determined to conduct elections in difficult circumstances, we should also be determined to use our vote. The message of the Chief Election Commissioner of the Election Commission of India was also heard on the occasion.

On the occasion of National Voters’ Day, Chief Lokayukta Shri Sharma administered the oath to the voters. He vowed to the voters, ‘We citizens of India, keeping our full faith in democracy that we will uphold the dignity of democratic traditions of our country, and keeping the dignity of free, fair and peaceful elections intact, fearless religion, Pledged to exercise his franchise in all elections without being influenced by any temptation of class, caste, community, language or any other.