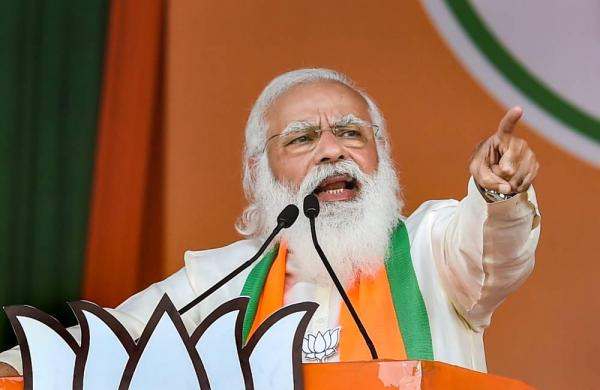 By Online Desk
KOLKATA: Prime Minister Narendra Modi Sunday launched a blistering attack on West Bengal Chief Minister Mamata Banerjee, accusing her of “betraying and insulting” the people of the state who trusted she will bring about a change after the Left rule.

He also accused her of nepotism by choosing to play the limited role of “bua” (aunt) to her “bhatija” (nephew) instead of becoming “Didi” (elder sister) to the people.

Addressing a massive BJP rally at the Brigade Parade Grounds, his first in West Bengal after the announcement of assembly polls, Modi hit out at his detractors who accuse him of favouring a handful of his businessmen friends.

“The dream of ‘sonar bangla’ will be fulfilled. Today, I have come here today to assure you of Bengal’s development, to increase investment here, to protect Bengal’s culture and to bring change,” he said during the Brigade rally at Kolkata.

“In this Assembly elections, there are TMC, Left and Congress, and their anti-Bengal attitude on a side. On the other side, there are people of Bengal. Bengal wants ‘shanti’, ‘sonar Bangla’, ‘pragatisheel Bangla’. This Brigade Parade Ground has been witness to many great leaders and also witnessed those who have disrupted West Bengal’s progress. People of Bengal never left their hopes for change,” he said.

#WATCH | You are well aware of the condition of ‘Maa, Manush, Maati’. Mothers are being attacked on streets and in their houses. Recently, the cruelty unleashed on an 80-year-old mother has shown their cruel face to the entire country: PM Narendra Modi pic.twitter.com/OHEXCTlt3L
— ANI (@ANI) March 7, 2021

“You know it very well how the democratic system has been destroyed here. BJP will strengthen this system. We will bring the change to re-establish public belief in govt systems, in the police, and the administration,” he said while attacking the Mamata Banerjee-led state government over the state’s deterioting law and order.

“I have come here to make you believe that we’ll work hard for farmers, businessmen and the development of sisters and daughters. We will live every moment to fulfill your dreams,” he added further.

“They made promises to work for ‘Maa, maati, manush’. But you tell me, has TMC been able to bring change in the lives of common people here in the last 10 years? The people of Bengal had chosen you as ‘Didi’ but then why did you remain the aunt of a nephew? The people of Bengal are asking only this one question from you,” Modi said while lashing out at Mamata.

#WATCH | Your (Mamata Banerjee’s) scooty took a turn towards Nandigram instead of going to Bhawanipore. Didi, I wish everyone well and don’t want anyone hurt. But what can I do if the scooty is destined to fall in Nandigram?: PM Narendra Modi pic.twitter.com/OycJdytWNk
— ANI (@ANI) March 7, 2021

“You have betrayed and insulted the people of Bengal who trusted that you will be the harbinger of change after the end of the Left rule. You smashed to smithereens (chaknachoor) their hopes and dreams,” he said, excoriating the TMC supremo.

He alleged Banerjee promoted nepotism while neglecting the people who fondly called her ‘Didi’.

“Bengal chose you in role of ‘Didi’ but you preferred being ‘bua’ to your ‘bhatija’,” he said.

“Some days back, when you rode a scooty, everyone was praying that you are not hurt. It is good that you didn’t fall, otherwise, you would have made enemy the state where the scooty was manufactured. Your scooty took a turn towards Nandigram instead of going to Bhawanipore. Didi, I wish everyone well and don’t want anyone hurt. But what can I do if the scooty is destined to fall in Nandigram?,” he said.

The BJP has been accusing Banerjee of trying to install her nephew and Diamond Harbour MP Abhishek as the next chief minister.

Hitting back at rival leaders like former Congress president Rahul Gandhi and Banerjee, who often accuse him of favouring his industrialist friends, Modi said given his humble background he valued friendship.

“All 130 crore people of India are my friends, I work for them. I gave 90 lakh gas connections to my friends of Bengal. I have special affinity with tea, and the tea garden workers of Bengal are my friends for whom I have implemented a social security scheme,” he said.

“TMC ka khela khatam, vikas shuru…vote for BJP fearlessly, vote against bad governance. These people are experienced people and play a lot! They have done innumerable corruption and looted the people of Bengal. They have even looted the relief money sent for Amphan,” he said.

“I have known Didi since ages. She is not the same person who raised her voice against the Left. She speaks someone else’s language now and is being controlled,” Modi said while attacking the Bengal CM.

“Tolabaazi, syndicate, commission cut! You have done so many scams that a ‘Corruption Olympics’ game can be organized. You have played with the hard-earned money of the people and their lives,” he said.

Modi has often spoken about how he used to sell tea at a railway station and on trains as a small boy.

He also attacked Banerjee for triggering the insider- outsider debate.

“When those believing in Marx and Lenin and a party like the TMC, an offshoot of the Congress, are parties of insiders, how the BJP, for whose foundation Syama Prasad Mookerjee was the source of inspiration, can be a party of outsiders,” he said.

The prime minister said he was committed to bringing about “asol parivartan” (real change) in West Bengal where all sections of people progress but nobody is appeased, and infiltration is stopped.

“Be it North Bengal or South Bengal, ordinary people or refugees. All will progress but nobody will be appeased. Infiltration will be stopped completely,” he asserted, reaffirming his commitment to the Mantra of ‘Sabka Saath, Sabka Vishwas’.

Accusing the TMC government of destroying the democratic system, he alleged ‘loktantra’ (democracy) was replaced with ‘lootantra’ (systematic plunder) in the 10 years of its rule.

“Lotus is about to bloom in Bengal because of the ‘kichad’ (muck) created by you, Didi,” he said.

(With ANI and PTI Inputs)