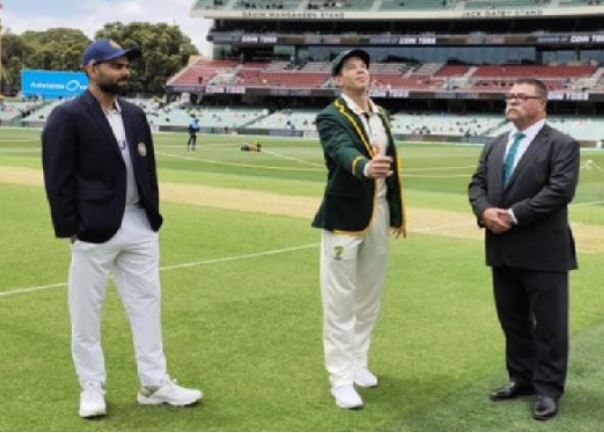 India won the toss and has elected to bat first against Australia in Adelaide.  Australia has played and won 7 matches under lights, four of them at the Adelaide Oval. India, on the other hand, played its first and only win late last year against Bangladesh at the Eden Gardens.

The first Test of the four-match series is played with pink-ball while the rest of the series will be played with red-ball. Virat Kohli-led side announced their playing XI a day before the game which included Prithvi Shaw and Wriddhiman Saha.

The visitors have opted for three seamers and one spinner in the first Test. Jasprit Bumrah, Mohammad Shami, and Umesh Yadav are the three pacers while Ravichandran Ashwin has been chosen as the lone spinner.

On the other hand, Tim Paine-led side has handed a debut Test cap to all-rounder Cameron Green before the toss. Pacer Pat Cummins presented the 459th Australian Test cap to Green.