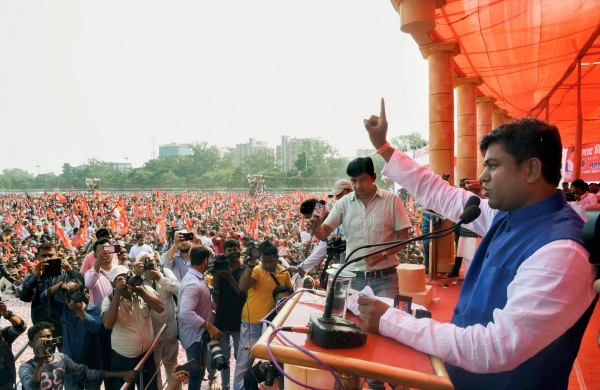 Express News Service
PATNA: Kickstarting ‘khela’ in the NDA government, Minister of animal husbandry and fisheries in the Nitish Kumar-led government, Mukesh Sahni, requested the Chief Minister to return the money taken from MLA’s funds to its concerned members, on Thursday.

The Vikassheel Insaan Party chief added that since Prime Minister Narendra Modi has announced free Covid-19 vaccine to all the states “the state governments will not have to meet the cost of the vaccines.”

Bihar government should return the two crore rupees taken from the funds of the MLAs and MLCs, Sahni said in a letter to the CM.

Sahni cited that the MLAs are engaged in developmental efforts for the people and in order to carry it on they need the money from the MLA fund.

The state government had authorised MLAs under the Chief Minister Area Development Scheme in Bihar to spend Rs 3 crore every year in their constituencies.

But due to the onset of the second wave of COVID-19, the Nitish Kumar government had announced that it would be taking away two crore rupees from the funds of each of the MLAs and MLCs to keep the health department functioning during the surge of Covid patients.

Recently, RJD leader Tejaswi Yadav, too, had questioned the decision to take the money from the funds.

In the response from the government, Vijendra Yadav wrote to Tejashwi Yadav that the government was well within the rights to the money of Mukhyamantri Kshetra Vikas Yojana.

Now that the request has risen from a member of a prominent NDA ally, the government is in a fix on how to respond.