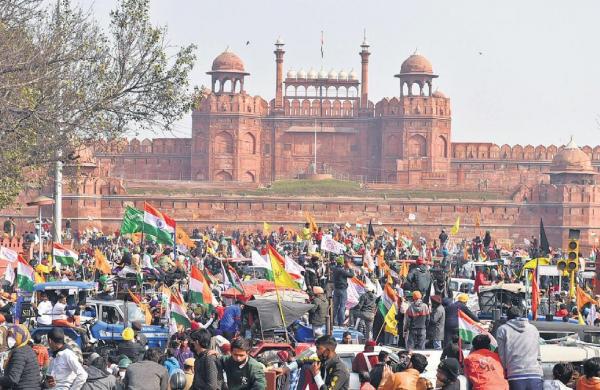 By Express News Service
NEW DELHI:  Republic Day that is marked by pomp and show in front of stately government edifices and seats of power turned into a day of anarchy when thousands of farmers entered the heart of Delhi much ahead of the agreed time and after deviating from pre-determined routes. What was promised to be a peaceful tractor rally at agreed routes was anything but that as the protesters, who outnumbered the police in all the three routes, defied tear gassing and lathicharge.

They breached barricades and clashed with the police at several locations. By the end of the day, one farmer had died, an unspecified number of them injured and 86 police personnel were hurt, some of the critically, the police said. The farmers riding tractors, SUVs and two-wheelers breached security cordons and barricades, entering Delhi before 12 noon, the agreed time for their rally.

The first breach happened from the Singhu border in north Delhi, when farmers forced their way through. This was followed by protesters entering the city from Ghazipur in East Delhi.  Once in the city, the protesters clashed with the police first in ITO, central Delhi. They used their tractors to break the police barricades. Buses parked in the middle of the road to obstruct them were vandalised and it was here that Navneet Singh, a farmer driving a tractor died.

While the police claimed he died as his tractor turned turtle, the farmers alleged that Navneet was killed in police firing. The protesters draped his body in Tricolor and sat in protest for several hours in the middle of the road. The scene then shifted to the historic Red Fort, where both sides fought pitched battles. Hundreds of farmers reached its rampart and hoisted their flag where the Prime Minister every Independence Day hoists the national flag and addresses the nation.

“About 200 artists and kids who got stranded inside Red Fort were safely rescued. These artists came here for the Republic Day parade. The police first took them to a nearby hotel in Daryaganj to have food and then carefully rescued them to their destination,” said DCP North Anto Alphonse. The Samyukta Kisan Morcha, the umbrella organisation of all the 40 farm unions distanced itself from the violence and blamed anti-social elements.

Later in the evening it said they had called off the kisan rally and asked all the farmers to return to the borders. Joginder Singh Ugrahan, the leader of the biggest farm union, accused actor-singer Deep Sidhu for the violence and the flag hoisting at Red Fort. Sidhu was part of the election campaign team of Sunny Deol, BJP member of Parliament from Gurdaspur in Punjab. A leader of the morcha said it was the Kisan Mazdoor Sangharsh Committee that deviated from the agreed route. AIKS leader Hannan Mollah condemned the violence and said the farmers had been holding a peaceful agitation for the past several weeks.

an overturned tractor at ITO in central Delhi that killed its driver | PTI , SHEKHAR YADAV

Paramilitary deploymentA meeting chaired by Union home minister Amit Shah decided to deploy additional paramilitary troops in the wake of the violence. Around 1,500 to 2,000 personnel could be deployed

Tractor rally was permitted to start only after official R-Day parade, but a section of the protestors jumped the gun
Tractors violated the agreement on not carrying more than five persons
No weapons were to be carried, another stipulation that was completely ignored
Routes were clearly defined, but mobs took detours, violently confronting the police
Blow-by-blow account